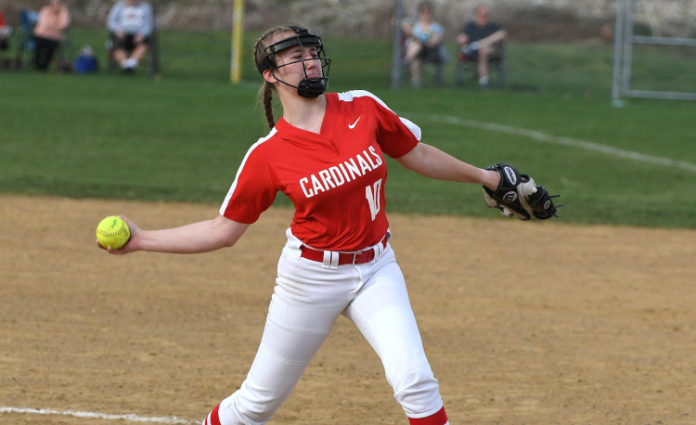 Dems struck out 11 and didn’t allow a hit nor a walk in leading the Cardinals to their seventh straight win.

“It was extremely exciting to go out there and dominate,” Dems said. “It was very cool that I got to achieve my personal best in high school so far. It also felt really good to lead my team to a win over a conference team.”

With the win, Mentor improved to 14-4 overall and 9-0 in the Greater Cleveland Conference. Medina is in second place with an 8-1 record. Both teams have three conference games remaining, including Thursday’s head-to-head showdown.

A win over the Bees on Thursday would leave Mentor with at least a share of the conference title.

Dems faced just 16 Euclid batters and threw first-pitch strikes to 12 of them. Of the 54 pitches she threw, 45 were on the mark.

“All of my pitches were working well today, especially my rise ball and changeup,” she said. “It also helped that I had good spin on my pitches.”

Dems struck out the first six Panthers she faced but hit the leadoff batter in the third inning to break up her bid for a perfect game.

“It slipped,” Dems said of the 3-1 pitch. “I was trying to jam her inside with a curveball and it went up and in.”

Mentor’s offense was just as potent.

Mak Kobetisch and Madison Bregitzer led the Cardinals with two hits each and Jill Reardon and Bregitzer both knocked in a pair of runs.

The Cardinals scored 12 runs on 10 hits and struck out just twice.

Dems and Alesci both recorded their first hits of the season. The RBIs were the first for Dems, Renko, and Alesci.

Mentor puts it all together in win over West Geauga

Mentor’s ‘Field of Dreams’ will have to wait