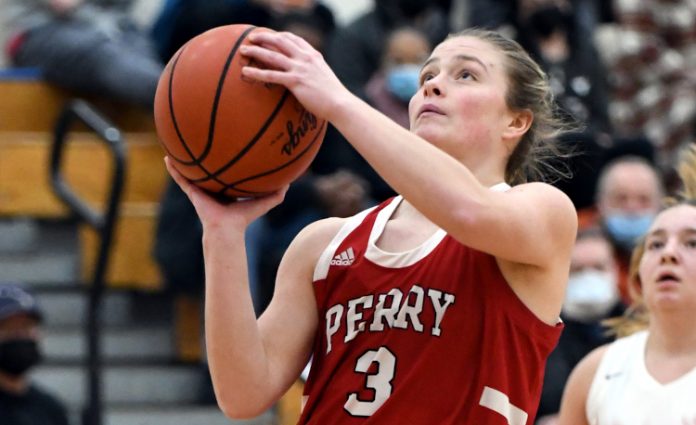 Perry used its depth to secure a 60-25 non-conference win at Willoughby South on Tuesday.

The Pirates, who opened the season with a loss at Mentor on Saturday, bounced back with a dominant performance against the Rebels.

Grace McKoon, who scored 25 points on Saturday, stayed hot as she scored four of her team-high 10 points in the first quarter as the Pirates pulled away from the Rebels, 19-8.

McKoon scored four more points in the third and two in the fourth to help the Pirates avoid back-to-back losses to start the season.

“It was important to bounce back with a win over South to get that winning feeling and to be the winning team I know that we can be,” she said. “Being the leading scorer has helped my confidence tremendously because I know that I can be the person to step up in key situations during the game where I have to score. Having my teammates and my coach who have a lot of confidence in me taking over helps a lot.”

McKoon has made the most of her opportunities in Perry’s first two games and she hopes to keep this momentum going throughout the season.

“My key is to just take the open shots and to drive when the opportunity is there,” she said. “My team does a great job of creating space and helping me get open to help me score.”

Sophia Makad and Rosalyn Tharp both contributed to the win with nine points, Victoria Lynch added eight, and Izzy McKoon and Kaitlyn Newsome both scored seven.

Audrey Austin pitched in with four points and Abby Bartlett, Eva Jean, and Sophia Wise each finished with two points.

“I’ve been really impressed with our younger kids,” Infalvi said. “They work hard in practice and have adapted to some of the different things that we’ve asked them to do and they’re getting a good feel for playing together. Our four seniors shave a lot of varsity experience and when they’re on the floor together, they kind of know the ins and outs of each other. But, this group is still learning and getting better each and every day. The difference from Saturday to today was huge and I think we’ll continue to get better.”

Perry travels to Lakeside on Tuesday.

North rides big second half to win over South