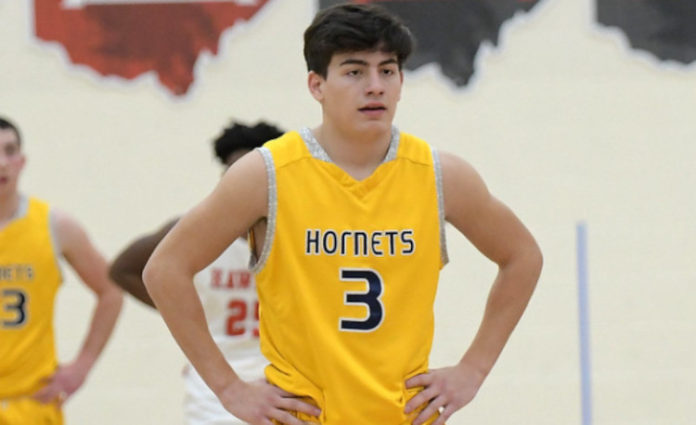 Depth pays off as Kirtland picks up first win

Kirtland opened the season with three straight losses and several key players missing from the lineup.

On Tuesday, the Hornets were nearly at full strength and went on to beat visiting Trinity, 84-66.

“It was important just to right the ship,” said Kirtland coach Shawn McGregor. “We really just wanted to get back to playing good, hard basketball and getting more into our stuff. With our depth, and guys coming back, that helped us play more than five or six guys and to get guys back into roles they’re used to playing. Last week, we had a lot of guys playing roles, that will help us in the future, but they haven’t played those roles at the varsity level and those minutes against pretty good teams.”

The Hornets wasted little time taking control of the game.

“It was nice just to play well,” McGregor said. “We did a good job of playing Kirtland basketball and getting out and playing good defense. We had good, balanced scoring again. I think the kids just needed a game to go out and play hard and make some plays against what I think is a really good Trinity team. They had everybody back from the year before but we just wanted to come out and have a good outing with their effort. The kids played really well.”

“He was a key,” McGregor said. “The amount of deflections he had and he keyed our pressure all along. He did a great job forcing turnovers and long passes that turned into easy offensive looks for us.”

“This first win meant a lot,” Lescano said. “We all played to our potential and were able to play at our pace. Getting DeMarco back was big for us because he’s such a great player.”

With DeMarco disrupting the Trinity offense, Lescano terrorized the Trojans on the other end of the court.

“It was a great night for me,” Lescano said. “First couple games, I played passive but today I got more shots up and got hot. This win will definitely carry into our matchup against Crestwood.”

T.J. Green also scored in double figures for the Hornets as he finished with 13 points.

The Hornets, who improved to 1-3, travel to Crestwood on Friday in the Chagrin Valley Conference opener for both teams and a rematch of last season’s sectional final. Crestwood won that game, 72-58.

“(Trent) Jakacki is an all-state player and they’ve got good athletes around him and some height and depth,” McGregor said. “It’s going to be a fun game. It’s a great way to start the CVC. To get momentum beating Trinity, we’re excited about the opportunity for sure. It’s obviously a goal for us to improve every day and I think we did that today.”