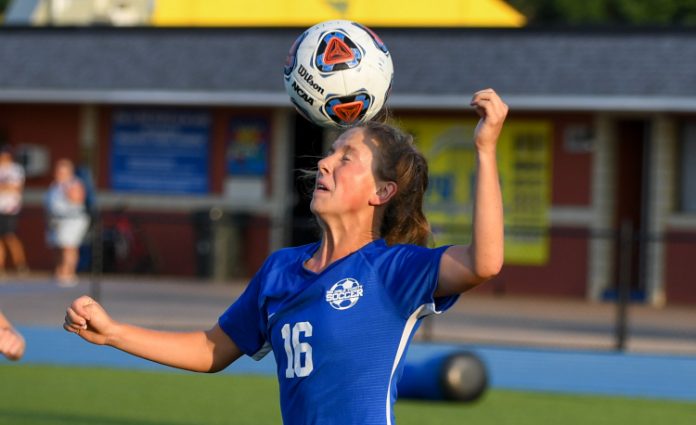 After a disappointing loss to rival Cuyahoga Heights a week ago, Independence was eager to right the ship in a conference game at Lutheran West.

Alex Adams and Alana Nowak both scored goals in leading the Blue Devils to a 2-2 tie with the Longhorns.

“One of the points of emphasis I gave today was resilience,” said Independence coach Bryan Less. “After our debacle last Thursday, we were very resilient tonight. We were down 1-0, and almost 2-0, but we came back and took the lead. Even after we gave up the lead, we fought and had some great chances.”

Injuries have taken their toll on the Blue Devils, who had just 13 healthy players suit up against the Longhorns.

“We played hard,” Less said. “The last two days of training we had a lot of talks about playing hard, playing aggressive, and we did that tonight. We had injuries and girls missing–we only had 13–but we played hard. Half the team played 70-plus minutes and we played from start to finish really hard. I was proud of how they played.”

Lutheran West took a 1-0 lead midway through the first half and nearly added a second goal but sophomore keeper Keely Sears thwarted that scoring opportunity.

“Keely made her first breakaway save,” Less said. “She came out just like we worked on and hit the ground, hands up, and their best player had a one versus one breakaway from midfield and Keely saved it.”

That play sparked the Blue Devils and Adams scored her eighth goal of the season off of a Nowak assist to tie the game at 1-1 heading into the break.

Nowak gave Independence a 2-1 lead early in the second half when she picked up a loose ball and buried it into the net from 20 yards out.

The Blue Devils had several other scoring opportunities but a hit post and a shot that went just wide kept the Longhorns in the game.

Lutheran West converted a corner kick into the game-tying goal with 13 minutes remaining.