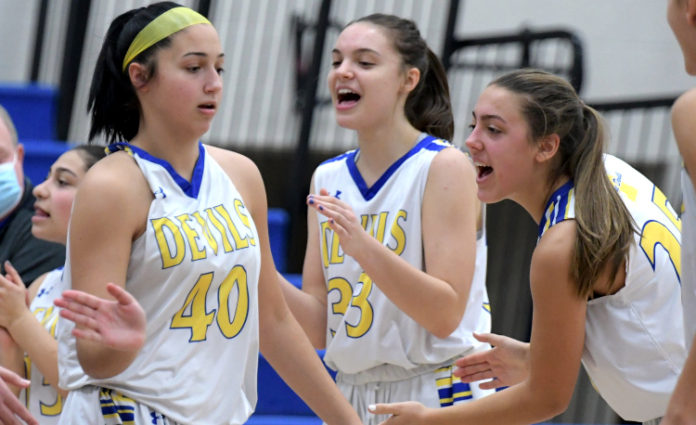 Senior Riccela DiGeronimo scored 14 points in her first full action since suffering an injury two weeks ago and led the Blue Devils to a 49-41 victory over visiting Fairview on Saturday.

“That was huge,” said Independence coach Mike Marcinko of DiGeronimo’s performance. “It was her first game back without any minute limitations but she still only played three quarters because we didn’t play our starters in the fourth quarter. Riccela did all her damage in three quarters. It was typical Riccela, she played both ends really well and she was a good leader. You couldn’t ask for anything more.”

DiGeronimo opened the first quarter with five points and added two more in the second. She scored seven in the third quarter to spark an 18-point run that helped Independence put the game away.

“We knocked shots down,” Marcinko said. “We were maybe a stop or two and a couple of buckets away from feeling really good about where we were at halftime. We developed some good looks but we didn’t knock shots down. That kind of carried over from Lutheran West (last Saturday), but this time, we knocked them down and we went from a six or seven-point lead to an 18 or 19 point lead and we felt more comfortable.”

The win was extra special for DiGeronimo, who played her final home regular-season game on Saturday.

“It was great to be back on the floor with my teammates,” she said. “To make it back for the last regular-season game was awesome. I’m very excited to be back and ready for the playoffs. This game was really special for me considering it was my last regular-season game and the first time back since my injury to play at home. I came out wanting to be aggressive towards the basket and play good defense to get a good team win.”

“Anna had a bit of a rough shooting day, which is out of character for her,” Marcinko said. “She got some good looks that didn’t go down but she rallied in the third quarter and got us a point. Then she also had some really nice assists to Madison inside where she came off of a ball screen and they came after her so she dumped it to Madison.”

Independence opens the postseason at home on Saturday against the winner of Wednesday’s sectional semifinal between Chippewa and Brookside.