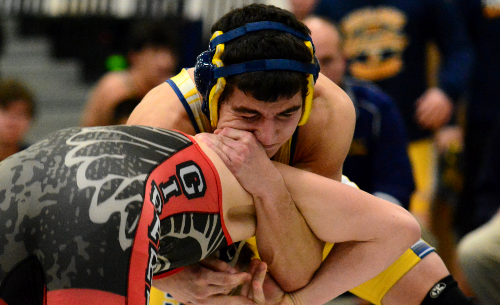 Garfield Heights –The preliminary rounds of the 2015 Ohio High School Athletic Association Division III District Wrestling Tournament at Garfield Heights High School are complete and all that’s left is determining the seeds each of the state qualifiers will carry with them into the 78th Annual OHSAA State Wrestling Championships next weekend.

Hawken’s Louis DeMarco, Kirtland’s Clayton Davidson and Independence’s Paul Deely all won their first three matches and will wrestle for first place. All three earned a berth in the state tournament for the second consecutive season. DeMarco placed eighth at state last year.

DeMarco, a senior, puts his 40-1 record up against Smithville freshman Riley Smucker for the 120 pound championship. DeMarco is ranked ninth in the state while Smucker comes in at No. 13.

Davidson, a senior who improved to 44-0 with his 9-2 semifinals win over Waynedale’s Kyle Ice, who was ranked ninth in the state and dropped to 52-4 with the loss, will wrestle Rootstown’s Luke Sorboro (46-2). Davidson enters the match ranked No. 8 while Sorboro is No. 12.

Deely, who is 36-7 as a senior, will wrestle Wellsville’s Seth Bloor (43-1). Bloor is ranked third in the state while Deely is fifth.

By placing among the top four in his weight class, Francis will make his third straight appearance at the state tournament. Spino returns to Columbus for the second straight season.

Cuyahoga Heights’ Ben Huff will wrestle for fifth place. All fifth place wrestlers are alternates for the state tournament.