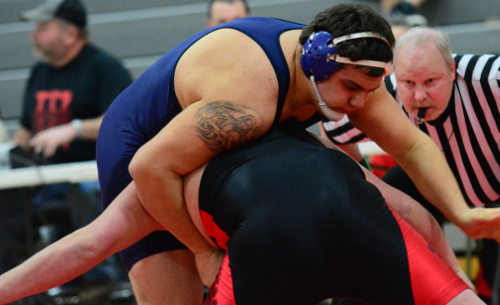 Tromba opened the tournament with a four minute pin of Jackson-Milton’s Karl Sarver then scored a two-point near fall with just 22 seconds left in the match to beat Chippewa’s Garrett Hall, 4-2, in the quarterfinals.

“It felt great,” Tromba said. “I needed a signature win on the season. I tried to pull it out the best I could.”

Hall, a No. 1 seed out of the Northwestern Sectional, scored the first takedown of the match. Tromba then scored a reversal to tie the match at 2-2 after one period. Hall then rode out Tromba for the full two minutes in the second period, which put pressure on the VASJ wrestler to keep Hall from escaping in the third.

He did that and more.

With time running out Tromba used a tilt to put Hall on his back for a two-count.

“I knew I had him,” Tromba said. “I rode him tough in the first period so I knew I could do it. I got the cross-wrist and pulled it in. I knew I had to hit it. I couldn’t wait around because there was short time left so I just rolled through and hit it.”

Tromba, who improved to 37-8 on the year, will wrestle Mapleton junior John Smith in the semifinals. Tromba is ranked eighth in the state while Smith is No. 9.

Deely, a returning state qualifier, set himself up for a return trip to Columbus with back-to-back wins on Friday. He pinned Pymatuning Valley’s Jaret Wright in the first round then scored a takedown in overtime to beat Fairless’ Adam Widder, 3-1, in the quarterfinals.

“It always feels good to come out of a tight, hard-fought match like that,” Deely said. “It’s a big moral boost going into the semis tomorrow. I just have to get it done tomorrow.”

As he always does, Deely wrestled a smart, controlled match.

When he felt he had the advantage of Widder, which occurred early in overtime, he went for it.

“I was working my underhooks pretty much like the entire match,” he said. I could tell he was definitely getting pretty tired out. I have pretty good conditioning; I do a lot of running and stuff. I knew if it went into overtime it was my match. I took him into OT and kept my underhooks and kept the pressure on and got that two.”

Deely, who improved to 35-7 on the year and is ranked fifth in the state, will wrestle Tuslaw freshman Brayden Phillips in the semifinals.