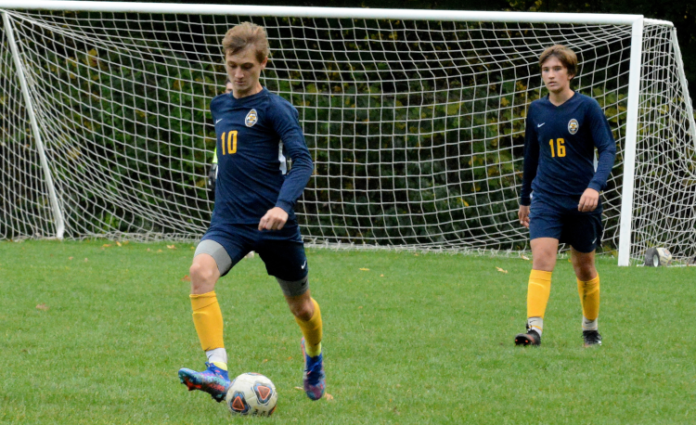 MENTOR—Aside from a 30-second span in the first half, Kirtland played a near-perfect game in beating Oberlin, 5-2, in a Division III district semifinal on Tuesday.

The Hornets led 1-0 before a defensive breakdown allowed Oberlin to score the equalizer. The Phoenix caught the Hornets napping after that goal and scored another one 30 seconds later on a long shot that appeared headed out of bounds before finding the upper left corner.

“We did have possession throughout the game and we created a lot of chances,” Kirtland head coach John Valentic said. “The score does not indicate what it could have been but these are high school kids, we’re trying to figure it out as we go. Overall, we have to be happy with the win. We had good performances from a lot of people. We’re still battling some injuries so hopefully, we can get healthier for Saturday.”

Evan Dures opened the scoring with a penalty kick just eight minutes into the game.

Oberlin tied it four minutes later when an attacker broke through the Kirtland defense and beat Kirtland keeper Spencer Fortney to the corner.

The Phoenix stole the ensuing kickoff and took advantage of the Hornets’ failure to retreat on defense. The long-shot curved into the net for a 2-1 Oberlin lead.

“I think it was us in a bit of a panic, a bit of anxiety,” Valentic said of the defensive breakdowns. “We weren’t clean or technical with the ball and they had good finishes. The one was there in the corner and the other a chip shot. Not to take away from them, but those were our mistakes and in a closer game those are going to hurt you.”

Jason de Zwaan tied it with 20:46 left in the half and Dures scored two more goals in the span of one minute to push the Kirtland lead to 4-2 at the break.

Dures added his fourth goal just nine minutes into the second half to close out the scoring.

With his four goals, Dures moved into a three-way tie for first place with 15 goals on the year. de Zwaan and Nico Podojil-Schlesinger also have scored 15 times this season.

The Hornets played without Marko Cubela, who has 13 goals and nine assists this season.

“I was confident that we would have a good starting team with Nico and Evan and Jason up top, but, obviously, it’s depth,” Valentic said. “Now you’ve got to use one of your reserves as a starter and if guys get banged up or carded, that’s where I was nervous. Overall, I knew our core would be a handful for teams.”

Kirtland advanced to the district championship for the third straight time and sixth time in the last seven seasons.

The Hornets will host Andrews-Osborne on Saturday in a rematch of the 2019 district championship game. Kirtland won that game, 3-2.

“I know they have two studs, two guys that are going to be strong,” Valentic said of Andrews-Osborne. “We have to do a good job defending with discipline and if we can possess like we did here, we’re going to create our chances and we’ll be in a good spot.”