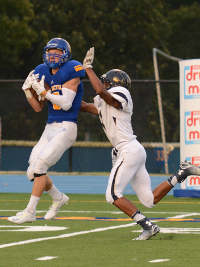 The Blue Devils dug themselves into a deep hole against Brookfield and never climbed out in a 33-0 nonconference loss on Alumni Field at Stan Skoczen Stadium on Friday.

“Our credit goes out to Brookfield,” said Independence head coach Jim Wotowiec. “They did a nice job against us. We weren’t able to generate a whole lot of offense. We had our opportunities but we kind of shot ourselves in the foot.”

Independence (1-1) took the opening kickoff and moved the chains but a tipped pass landed in the hands of Brookfield’s Brian Hiner, who returned the ball to the Independence 11. The Blue Devils responded with a forced turnover of their own when Steve Molchan recovered a Brookfield fumble at their own seven.

After Independence punted the Blue Devils’ defense stopped the Warriors on a 4th-and-2 at the Independence 20.

Quarterback Thomas Hockenberry then engineered a drive into Brookfield territory but another lost fumble thwarted the Blue Devils’ scoring opportunity.

“You’ve got to take care of the ball,” Wotowiec said. “You’ve got to be able to catch the ball and do things fundamentally. When it comes down to it, football’s a pretty easy game. You make catches, you tackle and you run. Unfortunately that wasn’t the story for us. Thank goodness there’s eight more weeks to go.”

This time Brookfield turned the miscue into points when Chris Johnson reeled off runs of 27 and 30 yards to set up the Warriors at the Independence 8. Augustus Necastro then connected with Kasey Tingler for the game’s first score.

After a 46 yard pass from Hockenberry to Brian Calvey the Blue Devils missed a 30-yard field goal attempt.

“We did some things uncharacteristic of us,” Wotowiec said. “We got inside the 10 and didn’t capitalize. You have to have some big plays to change momentum. Unfortunately, that didn’t happen.”

Brookfield led 14-0 at halftime and added 19 points in the fourth quarter to finish off the Blue Devils.

The Blue Devils hope to bounce back with a win at Lutheran West in Week 3.

“We’ve got to regroup,” Wotowiec said. “It’s a long season. We talk about peaks and valleys. This is one that we didn’t do very well in but we’ve got to come back and get out of the valley and get up on the peak a little bit and work hard at it for the next couple ball games. The next game is significant one for us now.”