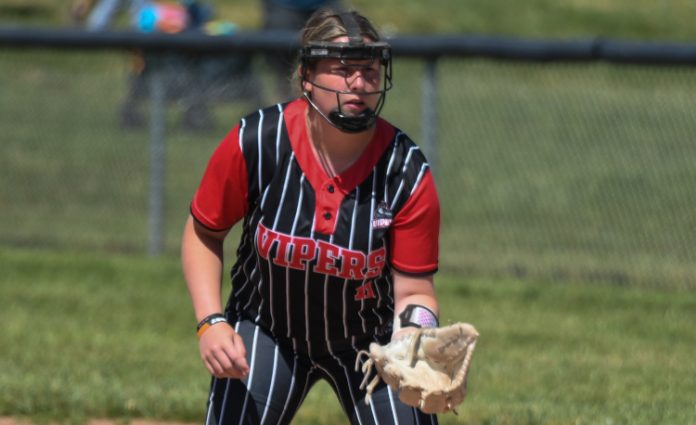 Elena Scott (North Olmsted 2025) put together a solid weekend in earning the Vipers 16U Player of the Week award.

Scott was solid at the plate and in the field as the Vipers went 2-3 at the FASA State Championships at Victory Park in North Ridgeville.

“The first couple of games were a little rough for us but we brought it back for the third game on Saturday,” Scott said. “We had a good game on Sunday morning too and I think I did well and I had a lot of help from my teammates.”

At the plate, Scott batted .333 (3-for-9) with three runs batted in, one run scored, one walk, and just one strikeout.

She threw 10 1/3 innings for the Vipers and recorded 11 strikeouts.

“I was just staying upbeat and keeping up with the momentum of the game,” Scott said. “We were all trying to not let ourselves get down after an out or a strikeout or if the person before you struck out. We tried to bring them back up with a hit.”

Despite the rough weekend in North Ridgeville, the Vipers have been playing well as a team in its first summer of existence.

“I think the first couple of weeks were hard because we were missing two of our key players and in the second week it was nice to have them back,” Scott said. “Now in the third week, we’re all getting along and we know we can count on people.”

Next up for the Vipers is the Cinderella Classic at Victory Park in North Ridgeville on July 9.