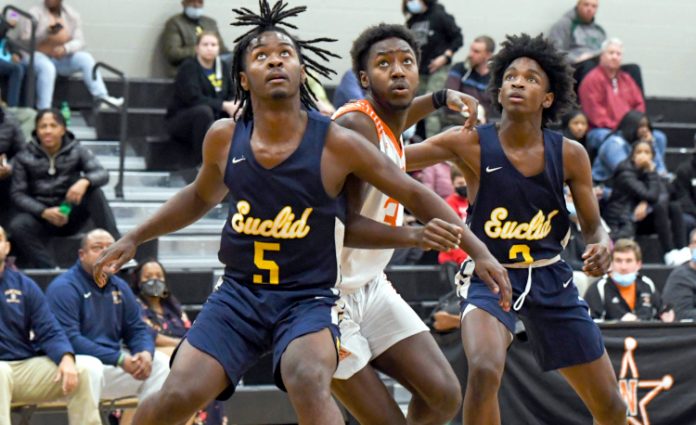 The Panthers closed out the first quarter on a 13-0 run and never slowed down as the Rangers struggled to match Euclid’s speed and athleticism.

“We knew that was going to be the case,” said North coach Matt Vespa. “That’s the reason we want to play them. We’re getting ready to move into our conference schedule and not a lot of teams in our conference are that deep or athletic, so hopefully, it will kind of prepare us for that.”

Cunningham scored 10 points in the first quarter and Duron Ramsey scored 11 of his 17 in the opening frame as the Panthers rallied from a 17-16 deficit to lead 29-17 heading into the second period.

The Rangers competed in that first quarter mainly due to the play of Sean Register and Kyle Randle, who combined for all 17 of North’s first-quarter points.

Register scored 10 of his team-high 23 and Randle added seven points in the first eight minutes.

“We knew what we were facing and when we executed against it, I thought we got some layups and good looks,” Vespa said.

Things took a turn for the worst when Randle suffered an injury and left the game early in the second quarter. He finished with just 11 points.

“It doesn’t help when your starting point guard goes out,” Vespa said. “That kind of forced us to shift some stuff around. I thought we did a decent job for a while just kind of managing it but I think over the course of the game but you can only do that for so long. (Randle) was having a lot of success and was kind of our safety blanket. We remove that, against that kind of pressure, and in spurts we were okay, but we kind of wore down.”

Michael Moore also scored in double figures for Euclid as he finished the game with 13 points.

The Panthers drained 13 3-pointers in the win. Cunningham hit five of those behind-the-arc shots.

“Our defensive game plan was to kind of pack it in a little bit because they like to dribble and drive and they like to get in there,” Vespa said. “You’re not going to get a lot of guys coming off the dribble like Cunningham and then pull it back and hit the three. He did that and all I could tell our guys is to slap him on the butt and say nice shot. There’s not a lot you can do about that.”

The Rangers dropped to 0-2 on the season but they have learned a lot playing against quality competition in their prelude to the Western Reserve Conference portion of their schedule.

“It was a good test for us and hopefully we can learn from this and kind of bounce back on Friday,” Vespa said. “We’re still trying to figure each other out. It’s just game two for us. We’ve only had, I think, a week with everybody for the full practice, but Mayfield isn’t going to care, Kenston’s not going to care. We have to find a way to jell a little bit quicker. There are spurts where you can see we have potential to be pretty good, but spurts aren’t going to get it done against a team like that.”