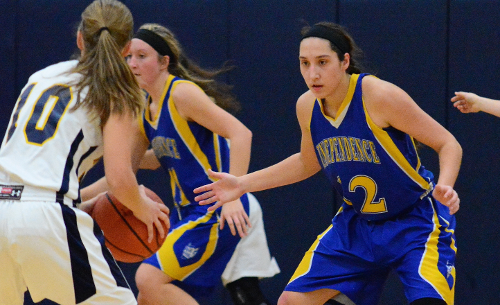 Ferrara averaged 14.5 points with six assists and 10 steals in two games against Trinity and Beachwood. Her 21 point performance had the Blue Devils in position to upset Chagrin Valley Conference Metro Division rival Beachwood.

Ferrara, also a member of the Independence softball team that played for a regional championship last spring, excels off the court as well.

“Nicole is a leader on the court and in the classroom,” Marcinko said. “She is an honor student that sets lofty goals personally, academically and athletically.”

O’Day scored a total of 62 points in three games against Pymatuning Valley, Wickliffe and Richmond Heights. She finished the week shooting 24-of-52 from the floor with three 3-pointers, 26 rebounds, three steals and three blocks.

“While Wickliffe and Richmond Heights are both strong conference teams, these past few games have a lot more to do with pride for our program, for Hannah, than anything,” said Hawken coach Patty Hace. “Our 5-10 record does not showcase the type of talent and hard fought games we've had this season. This is our turning point and Hannah's efforts this past week have certainly allowed for us to turn this corner hard.”

Despite battling an injury, O’Day has averaged over 15 points per game this season. She finished her sophomore campaign with 14.7 points per contest, which has led to extra attention from opponents this year.

“Hannah had a giant target on her back and often had a team's best defender on her,” Hace said. “She's had to learn a little bit of a different, but valuable role. It forced/allowed for other players to step up. While resting with her injury and having her out for a few games, we had another senior athlete Emily Oliver step up into the scoring role. And this past week, Hannah kicked it into first gear and everything fell into place. She and Emily ran the floor in the Wickliffe game and Hannah got great positioning on the offensive boards. Hannah's little jumpers and ability to finish strong gave her a crazy momentum against Richmond Heights. The key to that game for her was also knocking down some key free throw shots.”

She was 9-for-11 from the free throw line against the Spartans.

Smetana averaged 24.3 points, 10.7 rebounds, 3.0 steals, 1.7 assists, 1.3 blocks and took three charges in leading Berkshire to a 2-1 record last week. He was also 29-of-34 from the free throw line. Both wins—against Kirtland and Hawken—kept Berkshire in first place in the Chagrin Valley Conference Valley Division.

“Everyone celebrates Jarett's scoring and rebounding but I am especially proud of his clutch free-throw shooting and the selfless charges he takes to help his teammates and secure wins,” said Berkshire coach Keith Clapacs.

Smetana, who is among the top five scorers in the CVC, also is an honors student at Berkshire and has an interesting hobby.

“Besides Jarett's outstanding athleticism, he also excels in the classroom where he is an honor student and takes several AP courses,” Clapacs said. “He is well-rounded and devotes time to his studies, his basketball team, baseball team and golf team. In addition to balancing life as a student athlete, ‘Jerry’ enjoys cutting the grass and watching ‘Always Sunny in Philadelphia.’ He also loves the Indians and his shoe collection.”

Coaches, click HERE to nominate your athletes for Ward’s Lawn Care & Landscape Co. Players of the Week. Athletes from all Northeast Ohio schools are eligible for the award and nominations are due by 10:00 p.m. every Monday.