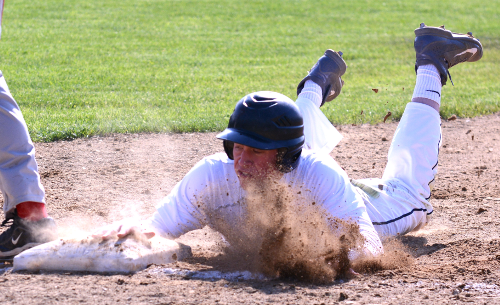 Kirtland’s Matthew Finkler proved again why he’s considered one of the most dominant pitchers in Northeast Ohio.

Last week, Finkler opened the season with a five-inning no-hitter and on Monday he struck out 14 and allowed just two hits in a 4-1 win over Cornerstone Christian. The Patriots’ run was unearned.

“He was in complete control of every at bat against the hitters,” said Kirtland coach Luke Smrdel said. “He threw first pitch strikes to get ahead of everybody and he mixed it up pretty well. It was another dominating performance.”

Finkler’s performance allowed the Hornets to pull out another win despite some struggles at the plate.

The Hornets, who improved to 2-1 on the season, scored a run in the first inning then loaded the bases in the second with no outs but weren’t able to add to their lead.

“We left too many guys on base,” Smrdel said. “We have to get our situational hitting cleaned up to make sure we plate some runs.”

Cornerstone pushed across a run in the fourth to tie the game. Kirtland went ahead 2-1 in the bottom of the fifth and added two insurance runs in the bottom of the sixth when Brendan Williamson drew a two-out walk and David Allchin singled and stole second. Both runners scored on a throwing error.

Allchin finished the game 2-for-3 with a triple, three runs scored and three stolen bases.

“His approach at the plate was great,” Smrdel said. “He has the mindset to get on base and he’s very fast, which is a skill that cannot be taught. He knows how to get around the bases.”

Anthony Fortuna was 2-for-2 with a stolen base.

“He’s just hitting line drives all over the place,” Smrdel said. “It was another productive day at the plate for him.”

Joey Bates singled in a run to earn the Hornets’ lone RBI of the game.