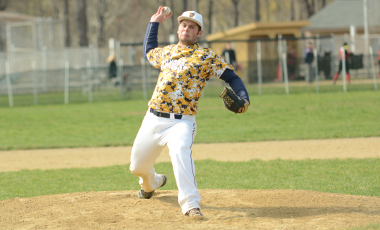 Kirtland’s quest for another conference championship is intact after a 13-2 win over visiting Cardinal on Tuesday.

The Hornets improved to 9-2 overall and 3-0 in the Chagrin Valley Conference Valley Division and complete the series with Cardinal in Middlefield on Wednesday.

“That was a good win for us,” said Kirtland coach Luke Smrdel. “We expect Cardinal to be ready to go and give us a great game (on Wednesday). We’ll prepare as best as we can.”

Matthew Finkler improved to 4-0 on the mound and lowered his season earned run average to 0.59 with a five-inning complete game. He struck out eight Cardinal hitters and did not allow a walk in the game.

“Matthew was once again in control of the game,” Smrdel said. “We made a couple of errors behind him but he battled through those situations and did a great job.”

Joey Bates led the way with a 3-for-4 effort. He also scored two runs and knocked one in.

“His first at bat he struck out then he made some in-game adjustments and his approach was good in his last three at bats,” Smrdel said.

“Owen came up with a lot of runners on base and he knocked them in. He hit the ball up the middle twice and four guys scored,” Smrdel said. “Brendan has really gotten his opportunity over the last couple of games and he’s run with it. He had a big hit against North and another one against Cardinal. He keeps coming up and taking advantage of his opportunities.”

Jacob Boyd flipped the momentum in Kirtland’s favor when he stole home in the bottom of the second inning. The Hornets went on to tie the game at 2-2 and scored four in the third and seven in fourth to seal their win.

“Cardinal actually had 2-0 lead and the pitcher was out of wind up,” Smrdel said. “Jacob got a good read and took off and scored. That really gave us the momentum and we ran with it.”

Cody Purpura, Ryan Bruncak and Joe Tucker all had hits for the Huskies. Tucker’s was an RBI double.