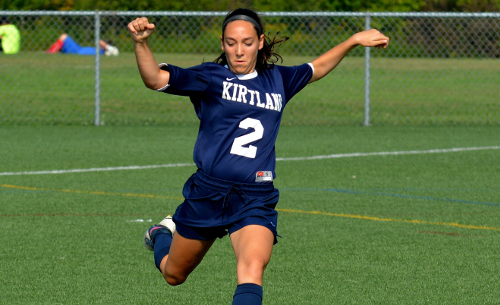 First career goal a big one for Kirtland’s Sarah Kadas

Kirtland senior Sarah Kadas probably wasn’t the logical choice to score the winning goal in the Hornets’ 3-2 comeback victory over visiting West Geauga on Thursday. She entered the game with just two assists to her credit in two years of varsity soccer.

Logical or not, Kadas got the job done.

“It was definitely a great feeling to help get my team this win, especially after a heartbreaking (1-0) loss last year,” Kadas said. “We all wanted this game so badly, so I just did whatever I could to contribute. We really deserved this.”

Kadas recorded just one assist as a junior and picked up her second career assist earlier this season in a game against Wickliffe.

“I told her she had an assist against Wickliffe and she said, ‘Oh, I did?’” said Kirtland coach Ed Bradac. “She’s not looking for the glory but I’m sure she feels good about getting that winning goal.”

She had that opportunity because the Hornets never quit after Hanna Zuzek scored twice in the first five minutes of the game to give the Wolverines an early 2-0 lead.

“We always talk about the first five minutes of the game,” Bradac said. “Those windows of time, the first five minutes of the game or the half, the end of the game, there are moments where you can’t have mental lapses and we had mental lapses. Hanna Zuzek, she’s a very good senior captain and we let her get free two times. We talked about her but we did a poor job and the girls will tell you that.”

Kirtland controlled possession for the rest of the first half but couldn’t convert on several scoring opportunities.

“We had three very good opportunities,” Bradac said. “Katie Straus hit the crossbar. Kerri Zalba was in front of the goal and pushed it over the top. We had three legitimate chances to score in that first half.”

At halftime, Bradac did what he could to keep his players in the game.

“I told them 2-0 is a horrible score,” he said. “It’s a horrible score because if you’re up 2-0 you’re still not far enough ahead and if you’re down 2-0 you’re still in the game. I said, ‘Look, the next score will make it 2-1 and doubt will creep in.’ You could see it. We scored that first goal and a few minutes later we scored the second goal and now it is just a battle.”

Hannah Vouk scored the first goal for the Hornets and Straus added the second to tie the game. Both goals came in the first six minutes of the second half.

“Deanna Ponzani got the assist on Hannah’s goal,” Bradac said. “She just basically gave it to Hannah and she split the defense and put it in the back of the net. Katie was about 25 yards out and she sees the keeper kind of up off her line and she just put it up over the goalie.”

Kirtland did everything Bradac asked them to do in the second half, which led to more scoring opportunities and keeping the Wolverines off the board in the final 75 minutes.

Bradac also shifted his strategy in the second half.

He returned Zalba to her old position on the defense to bolster that unit in front of keeper Maddie Zuberer.

“We made a couple shifts defensively,” Bradac said. “We talked about bringing the band back together. The band is Hallie Ward, Emily Kadas, Mo Zuberer and Kerri Zalba. We pushed Kerri back to defense and it just calmed everything.”

With Kirtland’s defense holding off the Wolverines, the Hornets attacked on offense.

Ponzani got her second assist of the game when she won a ball and sent it to Kadas in front of the net.