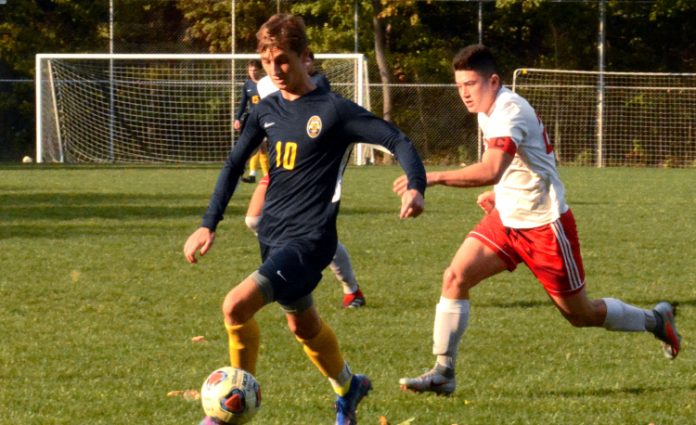 Evan Dures and Jason de Zwaan each recorded a hat trick as Kirtland opened the season with an 8-0 win over host Geneva on Tuesday.

The Hornets were scheduled to open the season at North on Aug. 13 but a thunderstorm wiped out that contest.

“We haven’t played since a scrimmage on August 4, so that’s 17 or 18 days, and as usual, there were some nerves and the guys were excited so the first couple of minutes were ragged but once the game got going we did some really nice things offensively and moving the ball well,” said Kirtland coach John Valentic. “Obviously eight goals, that doesn’t happen by luck.”

Peter Vukovic added a pair of goals in the win.

Marco Valentic led Kirtland with three assists while Vukovic finished with a pair. Vince Carriero, Vincent Vukovic, and Dures each contributed one assist.

“There are a couple of things we need to do out of the back in our movement and passing, but I’m nit-picking,” Valentic said of his team’s offensive performance. “It was a great first game and an important game because they’re in our conference. That was a great way to start the season.”

Anthony Svigel recorded just one save in notching his first clean sheet of his career.

Svigel played center back the past two seasons but stepped up to protect the net this season.

Kirtland travels to Perry on Thursday.