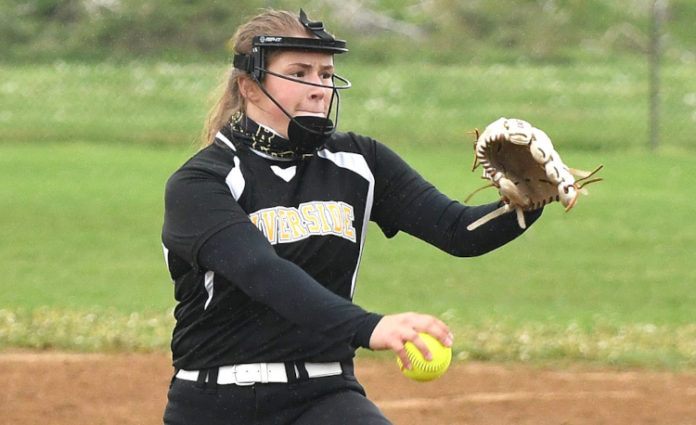 Riverside junior Grace Fisher fanned a career-high 17 batters as the Beavers won a sectional championship with a 6-0 win over visiting Mayfield on Wednesday.

Fisher allowed just one hit and faced two batters over the minimum in picking up her 11th win of the season.

“She was absolutely hitting her spots and threw with great speed,” said Riverside coach Bill Ross. “She definitely was a workhorse tonight.”

Fisher struck out all 10 Mayfield hitters that stepped up to the plate at least one time in the game.

“That was an amazing feeling to have 17 strikeouts,” she said. “I didn’t realize how many until after the game, and a career-high in the postseason felt great too. It was such a great feeling to come out on top with this win. A win to start the momentum into the postseason is a boost to our confidence and pushes us to work harder. We played great as a team and we need to focus on one game at a time now.”

She struck out the side three times and had at least two strikeouts in all seven innings.

“Our key to success today was mixing up speeds and moving the ball all around the plate,” she said. “I felt like doing this really kept the batters off balance and kept them guessing. My changeup and rise I felt were pretty strong today, but I think, for the most part, all my pitches felt good.”

With Fisher spitting fire at the Mayfield hitters, the Beavers used a team approach to plate their six runs.

Emma Kovalchuk singled and Amanda Kolar doubled in the top of the first to set the table for Emily Lamos, who singled home one run, and Delaney Keith knocked in another with a groundout that gave Riverside a 2-0 lead after one.

Lamos singled and scored on Maren Kelly’s RBI hit in the third and the Beavers put the game away with three runs in the sixth.

Molly Binkiewicz doubled to start that rally and Katie Ross, Allison Buttari, and Megan Lehner followed with back-to-back-to-back singles. Buttari and Lehner collected RBIs on their base hits. Kolar later hit a sacrifice fly to close out the scoring.

“It was a good team effort,” Coach Ross said. “We had 12 hits as a team and the kids are getting multiple hits. We had a couple of doubles as well. I thought it was a great team win. Even the three runs we scored later in the game started with our seven, eight, and nine hitters getting on.”

Lamos led the team with three hits and Lehner and Ross both finished with two.

“It was so exciting to get to play today and help out my team in every way I could,” Katie Ross said. “It’s so much fun playing with these girls. Every hit matters in tight games and those are the type of games we are expecting moving forward. I am always just happy to contribute to my team.”

Riverside’s hitters fed off of Fisher’s success in the circle.

“Grace threw such a great game today,” Katie Ross said. “As an offense, we try our best to give our pitchers as much run support as we can and I thought we did a very good job of giving Grace the run support she deserved. Grace and Emily have been on fire this season. They have had so much success this season and it is such a great confidence booster as a defense. We have so much trust on defense in our pitchers and our pitchers have so much trust in us. When our pitchers are on and our bats are alive, the energy just carries and we feed off each other.”

The Beavers advanced to the Division I Mentor District tournament where they’ll face New Philadelphia in the semifinals on Monday at 5:00 p.m.

The Quakers, who advanced with a 9-0 win over Massillon Washington, feature Julia Miller, a 5-foot-10 pitcher who will continue her education and softball career at Ohio State.

“It’s exciting,” Coach Ross said of the opportunity to face Miller and play in the district tournament. “We were super excited to play some new teams, so we’re very excited to play New Philadelphia coming up. We have a lot of respect for them. We’ve already done some research on them. It’s going to be a lot of fun but it’s going to be a challenge.”