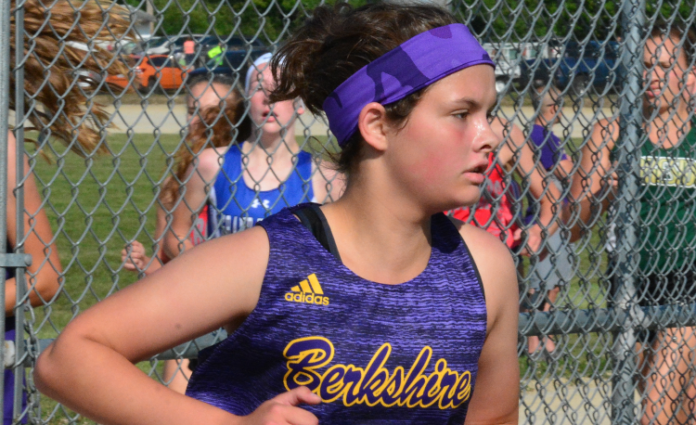 Five Berkshire seniors on Thursday signed a National Letter of Intent to continue their educations and athletic careers in college.

In normal times, the Badgers would have held a signing ceremony at the school but the Coronavirus stay-at-home orders forced athletic director Brian Hiscox into an audible. He set up a virtual signing ceremony for the athletes and their friends and families.

“I’m so excited to sign and have the opportunity to continue playing a sport I love to play,” said Matthew Politzer, who will study economics and play football at Wooster next year. “It truly is an amazing feeling.”

Joining Politzer in the virtual signing were Ethan Bennington, who will run cross country and track at Heidelberg, Lianna Tiber and Lizzy Dingman, who are headed to Ohio Northern for cross country, and Lexi Boyk, an Edinboro soccer signee.

Politzer earned two letters in football at Berkshire and three in track. He has many fond memories of his days competing for the Badgers.

“I would have to say my favorite memories both came from my senior year,” Politzer said. “One of them is upsetting Wickliffe in a super tight, competitive game. The second, and probably the best, is beating Cardinal for the first time since freshman year. That night was the most fun I’ve ever had on a football field; it doesn’t get better than that.”

Now, he’s looking forward to the next chapter of his life.

“Wooster is a beautiful school with a lot of fun things to do around it,” Politzer said. “As for the football side of things, they have an amazing program. They are always a super competitive team for division titles and that’s a program I want to be a part of.”

Politzer hopes the underclassmen he competed with can use his success story for inspiration as they chase their own dreams.

“For the underclassmen, I would say just don’t give up,” he said. “I didn’t play football my junior year and am still going on to play at the next level. Put your mind to it and go get it. On top of that, make sure you pick the right place to go play. I had my mindset on a different school and a Wooster coach reaches out to me, I went on a visit, and immediately fell in love. Make sure you make the right decision.”

He felt very comfortable at Heidelberg and is eager to begin his career there.

“It’s a very exciting experience for me and I’m very glad that I did decide to further my athletic career along with my education,” he said. “Heidelberg was a college that I felt at home. It was a very different experience than what I’ve seen at different colleges. It also helped knowing that close to 70-percent of their student body were all athletes and that was very encouraging.”

A team captain for both the cross country and track squads, Bennington also was one of the top runners. In cross country, he earned first-team All-CVC as a senior and second-team as a junior. He also helped to lead the Badgers to back-to-back league titles in 2017 and 2018.

“My favorite memories are basically all the memories I’ve made with the cross country guys as they are all my best friends and family and it’s always a blast with them,” Bennington said. “Along with that, I’d definitely say the CVC meet in 2019 and in 2018 were probably the most memorable experiences I’ve had while racing.”

Bennington, who will study exercise science or sports medicine in college, also hopes to inspire the younger generation of runners.

“I hope they’ll learn that you can do anything if you just trust your coach’s plans that he has and you push yourself as hard as you can,” he said. “If you believe that you can do it then you can accomplish your goals and move on to bigger and better ones.”

Tiber, a four-year letter winner in track and one-year cross country runner, will study Mechanical Engineering at Ohio Northern while also running for the Polar Bears.

She earned four letters in track and one in cross country.

Tiber served as the president of the National Honor Society, vice-president of CARE Team and was a member of several other organizations.

The opportunity to continue her education and running career at Ohio Northern was too good to pass up.

“I find it very exciting to continue my education while continuing to be an athlete in college,” she said. “I was drawn to Ohio Northern first off because it was a school I could run at and it reminded me of home. I just felt like I belonged there.”

Dingman will also play in the ONU orchestra while studying graphic design.

While she’s very excited about the next phase of her life, she’ll never forget her time as a Badger.

“There are so many good memories I’ve had competing at Berkshire,” she said. “I would have to say my favorite memory was making it to states my first year of cross country as well as all the wacky things the boys team has done over the years that made me laugh.”

Boyk will major in physical therapy while competing for the Edinboro soccer team.

“It is very exciting to be playing soccer and studying at Edinboro,” she said. “I have already met my roommate. Since freshman year, and honestly before that, I have always wanted to play at the next level and it is still hard to believe I will be doing so.”

She certainly left her mark at Berkshire.

In addition to earning a total of 13 varsity letters—including four in soccer and basketball, three in track, one in football and one in softball, she was named first-team all-conference seven times and second-team twice.

Boyk also was named all-district in soccer and basketball and in 2019 she became just the second Berkshire soccer player to be named All-Ohio and was a key player in the Badgers’ run to their only CVC title in 2017, a season that ended with a perfect 16-0 regular-season mark and a trip to the district title game.

She set several school records during her career.

Boyk is confident her records can be challenged if future players put in the work and remain focused on their goals and dreams.

“I hope the underclassmen always put their heart into what they are doing and know that everyone around you supports you,” she said. “If someone calls you a try-hard so what, you’re pushing yourself to become a better athlete. Make sure to set goals for yourself and every day think of how you can achieve them, but most importantly, have fun, let loose and enjoy these years of high school sports because you’ll make so many memories that you’ll remember and cherish.”