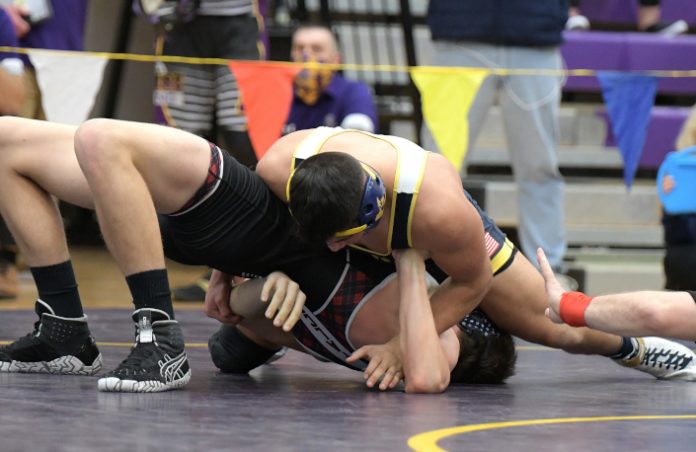 Five Kirtland Hornets earned a spot on the podium at the 56th Annual Kenston Invitational Tournament on Wednesday. Kirtland placed sixth as a team.

Davidson won the 132-pound weight class with two pins, a technical fall, and a 3-1 decision in the championship bout.

Braud won the 190-pound weight class with a pair of pins and two decisions.

“I was fired up to compete after our cancellations over the past few weeks,” Braud said. “It was very fun to come out and win the KIT.”

Braud opened the tournament by grinding out a 10-4 win over Ontario’s Grason Bias and then pinned his next two opponents to reach the final.

There, he beat Rootstown’s Lane McKenzie, 9-2.

“My first match of the tournament may have been one of my worst matches ever but other than that one I felt I did pretty good,” Braud said. “I was at my best on my feet and being able to get takedowns I needed. I will just keep working on my shots to improve the smoothness of them over the course of the season.”

Savelli won his first two bouts at 144 pounds before dropping into the consolation bracket. After a loss in the consolation semifinals, he bounced back with a pin in the fifth-place match.

Babic used a pair of pins to reach the 165-pound semifinals where he lost to eventual champion Lane Abrams of Fairfield. Babic then scored a major decision in the consolation semifinals and then beat Crestview’s Connor Morse for third, 6-5.

Gencarelli pinned his first two opponents at 175 pounds and then dropped into the consolation bracket. He edged Willoughby South’s Nick Hollerbach in the consolation semifinals, 4-3, and then closed out the tournament with a 9-6 win over Kenston’s Ben DiMarco in the third-place match.