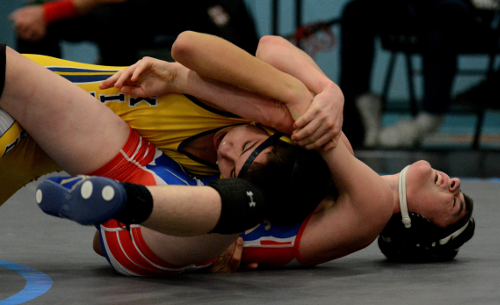 WILLOUGHBY—Led by Brendan Williamson, who finished second at 113 pounds, five Kirtland wrestlers placed among the top six at the 2015 Rebel Invitational Tournament at South on Saturday.

Williamson’s only loss of the day came to South’s Spencer Dusi.

“Coming into the tournament my goal was to become top two,” Williamson said. “Last year, I took third, so the goal is always do better than the past years. I knew I would've seen Dusi at some point in the tournament. He's an all-around good wrestler and I couldn't capitalize on anything.”

“Overall, the kids came in here and they did pretty well,” said Kirtland coach Scott Francis. “After wrestling on Thursday we had some stuff to fix and they did a good job of fixing that stuff, but of course in wrestling you make different mistakes so we’ll have to fix the next thing. We are seeing the improvement we want to see.”

“Konnor Duncan came in, it was his first time ever wrestling in a tournament as a freshman, and he wrestled nice,” Francis said. Brendan had a good tournament and Chris Brown did too. He probably would have liked to place higher but the matches he lost, we thought if we fix a few things and those are winnable matches for him. Gus had two kids that are pretty good in his first two rounds and he wrestled a good match in his third round to get that win. Alex French, another freshman came in and took third place. He had a good tournament.”