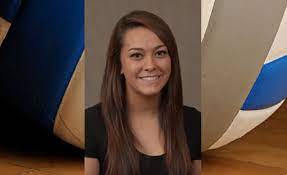 When it came to selecting a new coach to guide the Kirtland High School volleyball program, athletic director Matt Paul was impressed by Arlayna Newcomer’s resume.

But, it was what didn’t appear on paper that helped him make his decision.

“I loved that she is so passionate about volleyball,” Paul said. “Not only does she love coaching, but in her free time, she loves to play. I expect she will bring that type of enthusiasm and culture to the program.”

Newcomer succeeds Bob Schenosky, who guided the Hornets to a 13-6 record overall and a 9-5 mark in the Chagrin Valley Conference Valley Division last fall.

She inherits a program that returns two starters and two others with ample varsity experience from last season.

“I am extremely excited and grateful for the opportunity to coach at Kirtland,” Newcomer said. “I’ve heard a lot of really great things about the team and the community and I can’t wait to get in the gym and start working with the girls.”

In volleyball, she was part of a program that won three conference titles, three sectional championships, two district tournament titles and finished with a pair of regional runner-up finishes.

Upon graduation, Newcomer continued her education and volleyball career at Baldwin Wallace University, where she was named Rookie of the Year in 2013. The defensive specialist averaged 4.30 digs per set and finished third on the team with 288 digs and 25 service aces.

The three-time captain and four-year letter winner went on to earn All-Ohio Athletic Conference honors for her play on the court and her academic success.

“There are so many lessons I’ve learned, both volleyball related and in general, that I want to share with the team,” Newcomer said. “I know how much this sport has impacted my life and I want to make a similar impact on these student-athletes.”

From Rene Silders leading the Hornets to their last league championship in 2011 to Schenosky’s recent success, Kirtland has a proud volleyball tradition.

Newcomer expects to not only maintain the program but to also grow it through a focus on the basics.

“Volleyball is a sport that you see the most growth when you are playing and it all starts with fundamentals,” she said. “The girls can expect that we will be working hard and getting better, and it will pay off. I’m going to give everything I have to this program and I expect the same from the team.”

She believes the development of each student-athlete is the first step to building a winning culture.

“My high-priority short term goals include developing the players into successful student-athletes and being immediately competitive in the conference,” Newcomer said. “Long term goals are to win multiple conference championships, ultimately leading to a state title, to build an exceptional volleyball program for Kirtland and to develop long-lasting relationships with the players and community.”

Newcomer works as a Digital Media Specialist for Think-Digital and coaches a 13-and-under team in the Eastside Volleyball Club.