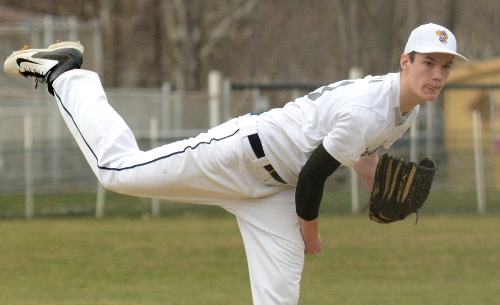 Kirtland’s Anthony Fortuna had a big day in leading the Hornets to a 9-3 win over Wickliffe on Thursday.

Fortuna was 3-for-4 with a double, a run batted in and he scored a pair of runs to help his own cause on the mound, where he allowed just five hits, three earned runs and struck out five to pick up his second win of the season.

“We fell behind 3-1 but he kept his composure,” said Kirtland head coach Luke Smrdel. “He had a lot of tough situations throughout the game and he battled through to the end. He pitched a fantastic game.”

Kirtland (7-1) took a 1-0 lead in the bottom of the first when Joey Bates reached on an error and scored on another Wickliffe miscue. The Blue Devils scored three runs in the top of the third to take control of the game but the Hornets chipped away at their deficit with one run in the bottom of the fourth and ran away with the game when they scored four in the fifth and three more in the sixth.

“Coming out of that game I feel a sense of confidence moving forward,” Smrdel said. “I’m proud of the way the guys performed. They held their composure through the game and showed lot against a really good team.”

Fortuna started Kirtland’s fourth off with a single and he scored on Vinny Matticoli’s base hit. The Hornets missed out on a big inning when they had two runners picked off base.

“He came up with two guys on and hit one to deep left center,” Smrdel said. “That got us a couple runs and really shifted the momentum. We got two more that inning and added three more in the sixth.”

Matticoli was 2-for-4 and Bates finished the game 3-for-4 with an RBI.