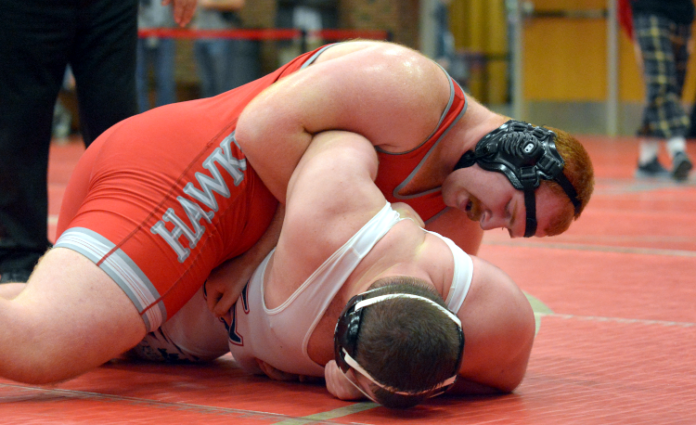 Four wrestlers from the Chagrin Valley Conference will head down to Columbus for the state tournament next weekend with a top seed next to their name.

Lakeside’s Jacob Lagoa, Cuyahoga Heights’ Nolan Frye and Haken’s Patrick Reineke and William Lindsey each won a district championship on Saturday, leading a contingent of 11 wrestlers from the conference who qualified to compete at state.

Lagoa became just the third Lakeside wrestler to clinch a district title when he clinched the 170-pound bracket at the Mentor Division I district.

“I was more focused than I have ever been in the past,” Lagoa said. “This is my last year and I missed last year. There are no more chances.”

A Division III state champion in 2017 and 2018 while at Ashtabula St. John, Lagoa did not compete in the postseason last winter.

He’s back and more ready than ever to stand atop the podium in Columbus.

He hopes that legacy helps to motivate future Dragon wrestlers.

“It’s important to keep on inspiring the kids that might look up to me in the school,” Lagoa said. “I have a baby brother who is just two, and it’s important for me to know that he can look back and see what his brother did.”

Lakeside’s Ethan Wannett placed second at 120 and will join Lagoa at state.

Reineke won the 106-pound title after finishing third last year. He went on to place eighth at state.

He’s excited about his second state tournament appearance, especially considering he’ll start as a No. 1 seed this time around.

“I’ve worked hard over the past few weeks and it’s just another important step in the way to win a state title,” Reineke said. “District titles are important for a good placement in the state bracket, so it was a pretty important weekend.”

As a freshman, Reineke dropped his first bout at state and then bounced back with a pair of wins before a loss to Frye sent him into the eighth-place match.

He plans to move up the podium a few spots this year.

“The goal is to win or place as high as possible,” he said. “I’m just going to continue to work hard and go down to the state tournament with the mentality I’ve had all season.”

All four pins came in the first period and he ended the tournament by sticking Kirtland’s Jeff Kusar in the championship bout in just 1:00 flat.

Frye placed second at districts last winter but wasn’t about to let the district title slip away this time.

He pinned his first two opponents and added a major decision in the semifinals. He topped Mapleton’s Hunter Frederick in the championship match, 8-4.

“I felt my high pace and constant pressure were the keys to the weekend,” Frye said. “It was very important to come out as a No. 1 seed leaving districts. The ultimate goal is to put myself in the best position to win a state title.”

He lost his first match, 2-0, then won five straight to finish third. He’ll approach this year’s tournament with a simple, but effective, approach.

“Take it one match at a time and stay focused every time I step on the mat,” he said.

Rowan will be joined at the state tournament by teammate Colin Koenig, who placed fourth at 138.

Rose reached the semifinals at 152 pounds but lost his final two matches to settle for sixth place.

“After I won my semifinals match, I was just so hyped that all the pieces to the season were falling into place,” Rose said. “I am extremely excited to finally make it down to Columbus.”

“I took a bad shot in and the kid went to spin behind, but as he did that, I hit a roll and caught his leg and his head to get the two (points),” he said.

He ended the night with a 14-5 loss to Waynedale’s Peyton Lemon, who recorded seven takedowns in his win.

“The loss in the finals shows me that I need to work more on my feet because the kid just dominated me on my feet,” Rose said. “I don’t really plan on changing much as long as I go out there and wrestle like I know I can and how my coaches have seen. I should be OK down at state, I just need to change up a few things to get me to that next level.”

Clymer reached the 195-pound semifinals but faced an opponent in Waynedale’s Cam Jordan he had lost two twice during the regular season. Jordan looked to be on his way to a third straight win before Clymer recorded a five-point move and finished with a pin to punch his ticket to state.

“It was incredibly exciting to win in the semis and know that I was state-bound,” Clymer said. “I had lost to Jordan twice earlier this season so that was a great win for me.”

Clymer was in a similar situation in the championship bout against Norwayne’s Kameron Kidd. This time, Clymer wasn’t able to climb out of an early 4-1 deficit and lost, 5-4.

“Next week will be a great experience for me,” he said. “I have some improving to do but overall, I think I will be able to compete very well against the competition.”

Like Lindsey, Kusar pinned his way to the 285-pound championship bout but suffered the loss to Lindsey.

Despite the loss, Kusar was excited to punch his ticket to state.

“Clinching my state berth was one of the most exciting things I’ve ever done,” he said. “It’s been my goal since I started wrestling and I finally achieved it.

Kusar managed to control the first three matches of the tournament but that changed in the finals.

“In the first three matches, I really just tried to wrestle the way I always do,” he said. “I think in the semifinals I might’ve been wrestling a little harder along with everyone else because it was to clinch states. Losing to Hawken in the finals hurt, but it gives me a bit to work on in the next week as I’m going to be wrestling more people on his level.”

Kusar is ready for his first state wrestling tournament experience.

“Approaching states, I’m going to really try to work on my weak areas in the few days of practice then go in, work my moves, and wrestle harder than I ever have before,” he said.

After a couple of near-misses, Berkshire’s James Klingman finished third at 106 pounds to earn his Division III state tournament berth.

“It feels amazing to make it out this year, especially after coming up short last year and not making it out,” Klingman said. “My goal for next week is to place in the state tournament. I’m going to have a good week of practice to prepare and then take it one match at a time.”

Klingman was never more prepared than for his consolation semifinals round, which also is known as the “blood round” or “go-to-state” match. If he won, he’d punch his ticket to Columbus. If he lost, his career would be over.

He pinned Wellsville’s Mason Simms in the first period.

“Going into my match, I knew if I lost it was the end of my career and that was not how I wanted to finish it,” he said. “I kept focused and went out there to win.”