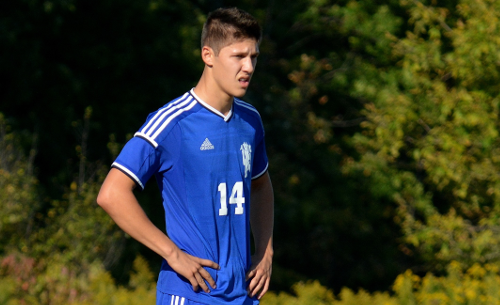 Kunevicius, a sophomore, scored seven goals and had one assist in two games during the week and now leads the Blue Devils with 27 goals on the season.

“Wyatt spent a ton of time in the weight room this past summer and came back to the season stronger and faster and the results have paid off,” said Independence coach Ryan MacRaild. “He may not be the fastest player on the field, but he has good sense and a great touch around the goal. He just scores. That is what he does.”

“Stephanie is a persistent, consistent, reliable threat both offensively and defensively on our team,” said NDCL coach Tom Ray. “As our No. 2 starting middle, she doesn't get the attention of many opponents but she earns their respect before the end of the match. Stephanie is an ideal player. She works hard at every practice and in every match. She's the ‘unsung’ hero at times in the press but our team is well aware of the impact she has in our matches.”

Young, a junior running back, carried 22 times for 157 and scored five touchdowns in a 41-40 double overtime victory over Cuyahoga Heights. He scored both of the Badgers’ touchdowns in overtime.

“As the game goes on, Jarett seems to get better and better,” said Berkshire coach Josh DeWeese. “He definitely rises to the occasion when the pressure is on.”

On the season, Young has carried 177 times for 1,630 yards and has scored 17 of the Badgers’ 23 rushing touchdowns. He has eight 100-yard rushing efforts to his credit.

Martin, a sophomore, scored three goals and assisted on four others. She also earned the Badgers three penalty kicks.

“Aysa is a sophomore captain of the Lady Badgers,” said Berkshire coach Rick Nerone. “She is normally our sweeper, but these last few games we have had some fun and let her go up top. She has led the all-sophomore defense to three shutouts this season. This week she led the Badgers in goals, and assists helping us go 2-1 and break the school record for most wins in a season with a 4-3 win over Waterloo.”

A three-sport standout, Martin has played a key role in the Badgers’ success this season.

“Aysa is a very hard working player on the pitch,” Nerone said. “She is very versatile and can play a number of positions, and not just play them, but also excel at them. She is one of the leaders of the Lady Badgers’ very young team.”

Coaches, click HERE to nominate your athletes for Ward’s Lawn Care & Landscape Co. Players of the Week. Athletes from all Northeast Ohio schools are eligible for the award and nominations are due by 10:00 p.m. every Tuesday.