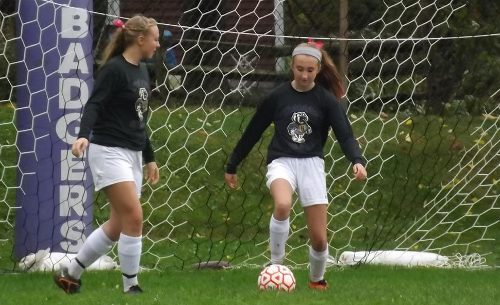 Two freshmen, a sophomore and a senior were among the athletes who turned in the best performances during the first week of the fall season.

Lillibridge, nominated by Berkshire head coach Rick Nerone, recorded 16 saves in wins over Ashtabula Edgewood and Grand Valley and also extended her school record time in net without conceding a goal to 137 minutes.

“Cat helped lead Berkshire to our first 2-0 start in school history, as well as our first two-game winning streak in school history,” Nerone said. “During these two games she has gone 137 minutes without conceding a goal, which is also a new school record. Cat has stopped two PKs, made 16 saves, and stopped several breakaways late in games to preserve school history for the girls varsity soccer program at Berkshire.”

Berkshire’s program is in just its fourth year of existence and Lillibridge is in her first as a keeper. She quickly became the leader of the Badgers’ all-sophomore defense and continues to develop her skills in net.

“Cat is one of the leaders on our young team,” Nerone said. “She is not the vocal type, but the lead by example type. She gives her all in everything asked of her. Cat often stays after practice to work on her game as well as to help her fellow teammates work on their game as well.”

Lechene, nominated by Cardinal head coach Karisca Chambers, recorded 42 kills and 62 digs in three games for the Huskies, all wins.

“She came out hot and ready to play for the first opening week of volleyball,” Chambers said. “She is not only a great and aggressive player but she is consistent. Caitlyn is quick and will not let a ball drop in the backrow. Her defense is just as strong as her offense.”

Lechene tore her ACL during her sophomore season and spent much of the preseason on the disabled list with an ankle injury. She returned in time to open the season with the Huskies and quickly established herself as a dominant force on the court.

“She is one of the best players in the game to not only watch but coach as well,” Chambers said. “She takes criticism well and pushes those around her to be better. Her determination is exquisite. Not only does she need the ball, but she wants the ball. She is constantly talking on the court and saying, ‘Here Maddie, I'm here.’ This helps give my setter, Maddie Bean, an outlet if the pass is off and their communication is constant throughout the match. Some athletes in the opening week come out flat, but not Lechene. She came out determined and ready to play.”

Snyder, nominated by head coach Joel Rabe, opened his freshman season on the cross country trail with an impressive finish at the Cleveland Running Co. Invitational hosted by Willoughby South.

Snyder finished the 5K race in 18:01, good for 23rd place overall. He was the first freshman to cross the finish line.

“Michael is so new to the sport of cross country that I just let him loose to see what he could do,” Rabe said. “Now that we have a benchmark to start from I'm excited to see what he can accomplish as the season progresses.”

With Snyder finishing among the top 25, Hawken placed eighth overall in the 18-team field. The Hawks were second in the Division II group, just six points behind Orange.

Only four freshmen finished among the Top 50 in the race. Snyder bested the second fastest ninth grader by 12 seconds.

Belitz opened his high school soccer career with a bang.

He scored a hat trick in his first game, an 8-0 win over Trinity, and followed that up with four more in a 9-2 victory over Open Door Christian School.

“Sam is a natural goal scorer with an ability to create chances for others as well,” said Independence head coach Ryan MacRaild, who nominated Belitz for Player of the Week honors. “His tenacity and vision help him as a freshman contribute at a very high level. He is a great complementary player to the other midfielders.”

Off the field, Belitz is an excellent student and also is a percussionist in the Independence marching band.

Coaches, click HERE to nominate your athletes for Ward’s Lawn Care & Landscape Co. Players of the Week. Athletes from all Northeast Ohio schools are eligible for the award and nominations are due by 10:00 p.m. every Monday.