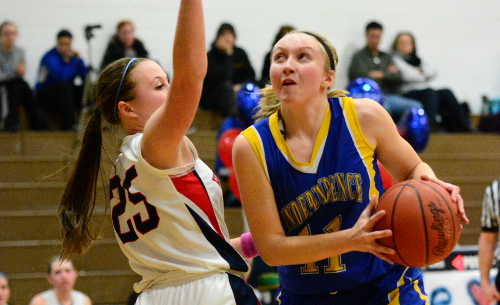 CHESTERLAND—Independence had a bit of trouble adjusting to West Geauga’s up-tempo pace and aggressive defense but once the Blue Devils found their rhythm they cruised to a 62-32 win over the Wolverines in a non-conference game at the Wolvarena on Monday.

Halle Dorko led the Blue Devils with a game-high 17 points and Nicole Ferrara added 15. Julia Riley and Hallie Zumack both scored 10 for Independence.

“Playing Saturday, coming in Sunday for an hour shoot around and trying to play on a Monday, I know we were dragging a little bit and they came to play,” said Independence head coach Mike Marcinko. “They had us sped up early and out of sync and they did a tremendous job. We were kind of surviving and keeping pace, which I give our girls credit for but we were not playing the way we wanted to.”

Victoria Sirna hit back-to-back 3-pointers to give Independence an early 6-0 lead. West Geauga’s Christina Rakich pulled the Wolverines to within 6-5 with a jumper and a three.

Sirna’s threes bailed the Blue Devils out of their rough start.

“That was great to see because she had struggled a little bit the last couple of games,” Marcinko said. “She’s been getting two or three a game for us for a while and kind of hit a dry spot. It’s nice to see her start us off. She single-handedly kept us in the game because we were not executing. She kept us in it.”

The Blue Devils, who improved to 11-9 overall, finished the opening quarter with an 18-11 lead.

“Finally, we started slowing down and executing on offense,” Marcinko said. “Defensively we got a little stronger and made a couple adjustments. They sat down and dug in, which was really the answer.”

Zumack scored all 10 of her points in the first half as Independence built a 33-20 lead.

“She was not feeling well,” Marcinko said. “Her stomach was bothering her and just wasn’t feeling good so she got a lot more subs than she normally gets. She kept telling us when she’d come back, ‘I’m good, I’m good.’ When it was getting out of hand she asked if she could be done and I said, ‘Absolutely, you’ve put enough work in for the day.’”

Ferrara did most of her damage in the third quarter to help the Blue Devils pull away. She scored eight points and created several other scoring opportunities with her defensive effort.

“Nicole typically leads us in deflections and steals,” Marcinko said. “She has a great knack and an eye for being in the passing lane and anticipating the next play. The one thing she has developed, and that’s something we worked on with everybody, is the pull-up jumper. She’s now beating her man but stopping short of the big girl and pulling up from 8-10 feet and knocking it down. That’s a lot of credit to her for staying after practice and taking what we’re doing in practice to heart. She’s benefitting from it.”

Riley picked up in the second half where Zumack left off in the first. She scored nine points in final 16 minutes.

Sophia Trombetta scored four points in the fourth quarter but the freshman continues to prove she is capable of competing at the varsity level.

Independence is at Valley Forge on Wednesday then closes out the regular season with a home game against Hawken on Saturday.