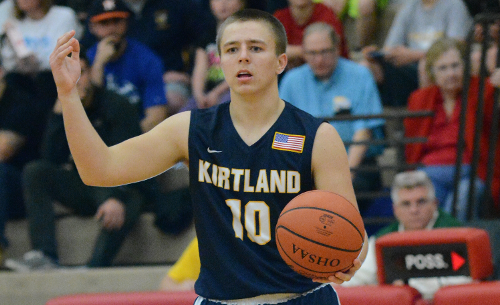 Four score in double figures as Kirtland holds off Garfield

The Hornets responded with a strong offensive showing in a 72-68 win.

“They really shoot the ball very, very well,” Gallo said of the G-Men. “They caused some problems early on. Without Evan Madden’s big first quarter, he had nine in the first quarter, we would have been in big trouble. He hit some big shots for us and we just kind of hung in there. “

Madden finished with 18 points while teammate Owen Lewis dropped 19 on the G-Men and Jeremy Davis and Palmer Capretta also scored in double figures with 16 and 11, respectively.

“This year we have a lot of guys that can put the ball in the basket,” Gallo said. “We’re just picking our shots a little bit better than we have the last couple of weeks. We always talk about taking great shots instead of good shots and I think our guys are doing a better job of that.”

Those shots weren’t falling in the first half as Garfield built a 36-29 lead.

Gallo made some halftime adjustments and the Hornets outscored the G-Men, 43-32, the rest of the way.

“I thought we didn’t do a very good job being patient in the zone,” Gallo said. “They played a 2-3 zone most of the night. In the second half we made some adjustments and Jeremy Davis had some big buckets. Owen Lewis had a huge third quarter. We made the necessary adjustments to win the basketball game but that’s a nice team over there.”

Lewis has been on fire over the past three games. He has scored 18, 12 and 19 points during that stretch.

“Owen Lewis, he’s played three great games for us the last three nights,” Gallo said. “He’s playing very solid ball for us. We put him on (Garfield standout) Dalton Fall early on (Saturday) and he’s just playing both ends of the floor. He’s driving the ball to the basket. Last year he was more of a set shooter for us and now he’s getting to the basket and becoming more of an overall basketball player.”

Davis also had a big night coming off the bench for the Hornets.

“Jeremy Davis has done a nice job of accepting his role coming off the bench and being a spark for us,” Gallo said. “He’s just playing some good basketball right now.”

The win was the fourth straight for the Hornets, who improved to 6-3 overall.

They’ll be tested in the coming weeks starting with a non-conference matchup with Perry (9-3) on Tuesday then a showdown with Chagrin Valley Conference Valley Division rival Berkshire on Friday. The Hornets are 5-0 in league play while Berkshire is 5-1.

“We’ve got a big week ahead of us with Perry on Tuesday and Berkshire,” Gallo said. “We’ve just got to take it one game at a time.”