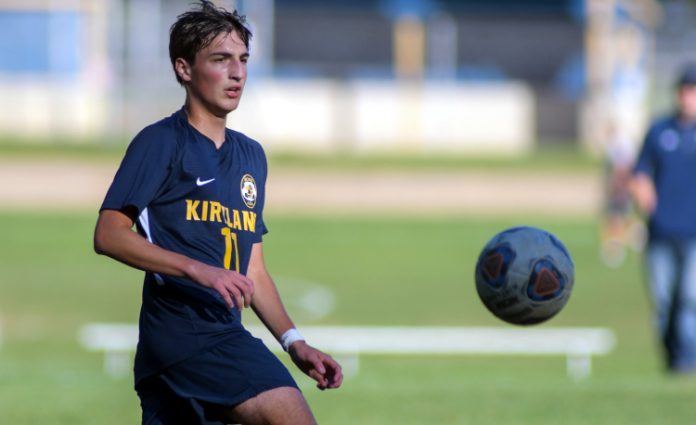 Petar Mijic-Barisic opened the scoring early in the second half, Marco Valentic followed with a pair of goals, and Jason de Zwaan closed out the scoring as Kirtland improved to 13-1-1 on the year.

“Overall, it was a solid team performance,” said Kirtland coach John Valentic. “It was a good performance. The guys who scored stepped up, and our defense, what can I say, that’s like our third or fourth shutout in a row.”

“We only had three subs, everybody played, and guys that came off of the bench changed the game for us,” Valentic said. “Austin Leland and Drew Duncan came in and they just allowed us to shift some other people around. Besides that, they were excellent where they played and it allowed guys like Marco and Jason a little bit more freedom to attack. I couldn’t be happier.”

With Leland and Duncan playing well, Valentic shifted Leo Mongelluzzi into a new role in the midfield and that move allowed the Hornets to create scoring opportunities in the second half.

“Drew Duncan played left back and I put Leo Mongeluzzi into the holding mid,” Valentic said. “We needed a little more pace and strength there and Leo did a great job there never having played there before. He looked like a natural.”

Mijic-Barisic broke the scoreless tie with his penalty kick in the 43rd minute.

“He earned that,” Valentic said. “He was fouled in the box so it was fair he took it. He stepped up without any hesitation. That was huge because it was our first goal and gave us a little momentum.”

Valentic made it 2-0 in the 60th minute and he added his second goal of the match five minutes later to push the Kirtland lead to 3-0.

It only took 20 seconds for de Zwaan to add another goal to the Kirtland lead.

The Hornets held off the Bison the rest of the way to record their ninth shutout of the season and their fourth straight.

“Anthony Svigel did a great job in the goal,” Valentic said. “He had to come up big on a few big shots.”

Leland and de Zwaan both recorded assists for the Hornets, who travel to Independence on Thursday.