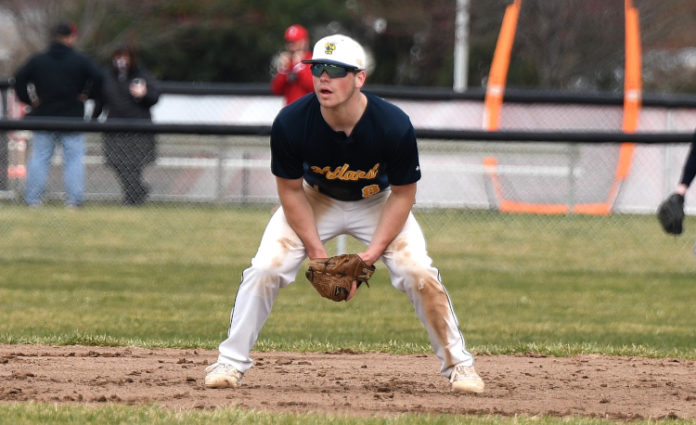 Kirtland coach Luke Smrdel isn’t among the biggest risk-takers in baseball but his decision in the top of the seventh inning on Tuesday led the Hornets to a 5-4 win at league rival Cardinal.

Leading 3-2 with runners at second and third with no outs, Smrdel opted to send both runners home on Mason Sullivan’s deep fly ball to center field. Reese VanArnhem, who doubled and stole third to lead off the inning, scored easily. Anthony DeMarco, who walked and stole second, slid around the tag at the plate to give the Hornets a 5-2 lead.

“That is the first time I have ever sent a guy from second,” Smrdel said. “Mason clocked the ball and it went to the fence in center field. Both of our guys tagged up and we got two runs off of that and that’s what the difference was in the game. I had two quick guys on and the ball was deep enough. DeMarco got a great jump from second after the tag. I knew we had to get another run and fortunately, he scored. It was close at the plate too but he got in.”

What a play! Mason with a deep sac fly. Reese tags up from third and Anthony tags from second to give the Hornets a 5-2 lead in the top of the seventh. #hornetpride pic.twitter.com/4PkotByJia

Smrdel didn’t know at the time just how important it was to add those insurance runs.

Cardinal’s Jake Bean singled to lead off the bottom of the seventh and Brandon Collins hit a home run to cut Kirtland’s lead to 5-4.

VanArnhem took the hill and recorded the save for the Hornets.

“Reese was clutch again coming out of the bullpen,” Smrdel said. “He came in and did a great job.”

Sullivan picked up the pitching victory after allowing two runs on seven hits with four strikeouts. Aaron Fortuna pitched to the two batters in the seventh before yielding to VanArnhem.

Kirtland took a 2-0 lead in the third when Mac Boyd was hit by a pitch and moved to third on VanArnhem’s single. Sullivan drew a walk to load the bases and Pierce Boyd singled home two runs.

Cardinal cut its deficit in half in the bottom of the inning as Justin Shank drew a leadoff walk and scored on Bean’s single.

The Huskies tied the game in the fourth on singles by Parker Campbell, Jerry Rose, and Austin Strever.

Neither team managed a run in the fifth but the Hornets took advantage of a Cardinal error in the sixth. Boyd singled to open the inning then stole his way to third. After two strikeouts, Adam Knaak reached on an error that allowed Boyd to score the go-ahead run.

Kirtland managed just seven hits off of Bean, who struck out 11 in his seven innings of work.

“He is very good. He’s a young, talented pitcher,” Smrdel said of Bean. “We worked the counts a little bit and tried to get his pitch count up. He was throwing strikes all day. We put the bat on the ball and got a couple of key hits. It came down to that. We had a couple of key hits at the right moment.”

The Hornets host the Huskies on Wednesday.

October 2, 2022
Khalil McDonald scored a first-half goal and Sam Eisenmann added an insurance goal in the final 40 of Independence's 2-0 win over Brush.