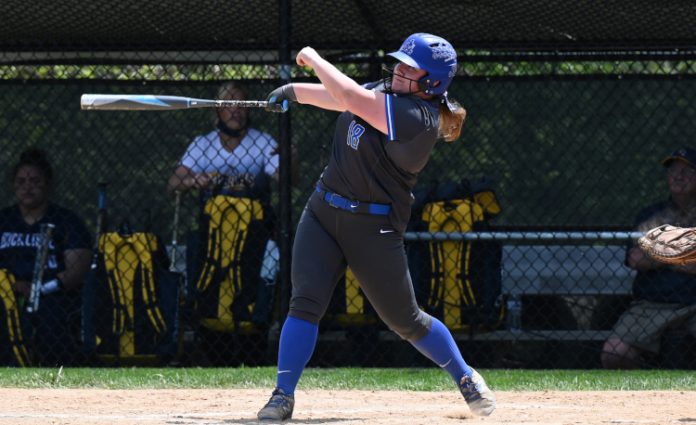 Gilmour Academy returns eight starters and five others with varsity experience as the Lancers look to improve upon last season’s 12-4 record.

While the Lancers may have snuck up on some teams last season, head coach Tony Bondra knows that won’t be the case this spring.

“We are poised to make a deep run in the playoffs this season,” Bondra said. “Last year, many teams in our division jumped at the opportunity to get in our half of the bracket and avoid the top-ranked team in the state at the time, Youngstown Ursuline. We were an unknown team that fell victim to many cancellations due to weather, so I see why they wouldn’t shy away from us. But, I think after those teams had an opportunity to watch us in action, they will now be a little less eager to play us this season.”

Bondra hopes to build off of that performance this season.

“We took on the No. 1 team, Ursuline, late in the regular season, and even though the final score was 4-1, we played them tough and held the score to 2-1 heading into the bottom of the sixth inning,” he said. “Then in the playoffs, we run-ruled a highly-respected Cardinal Mooney, 13-2, before falling to multi-state champion Warren Champion, 11-9, and that game was a back-and-forth battle where we had two runners on in the seventh inning with a bullet hit to the outfield with two outs that their right fielder made a phenomenal catch on. If she doesn’t come up with that ball, it could have been a completely different end result. And, let’s not forget, we defeated Division I Mentor, 8-6, during the season. If our team builds off those performances, I have no doubt we will be a formidable opponent to anyone this season.”

Bondra has a reason to be optimistic, actually eight reasons.

“We’ve got eight players returning with multi-years of significant starting experience, including three pitchers,” he said. “Our biggest loss will be the graduation of shortstop Emmy Klika, who was no question one of the most talented players in our area. But, I think we’ve got a number of athletes within our program and will have the flexibility to try a few people out at that position. Looking at what we have returning, along with what we’ve added, I’d say we’re going to be strong both offensively and defensively. Plus, we’re going to be aggressive on the bases. I think we will be able to produce a lot of runs, while holding our opponents to limited scoring due to our capable pitchers such as returning lefty Megan Mlinaric, who has committed to Capital University.”

Mlinaric, a senior co-captain, will play a key role in Gilmour’s success this season. She’s the ace of the pitching staff and will play first base when she’s not in the circle.

Last spring, she led the team with a .581 batting average and also recorded eight doubles, six home runs, and she knocked in 23 runs. She was 6-3 in the circle with one save and 41 strikeouts. She posted a 3.05 earned run average.

“She not only has an extreme love for the program, but for the sport,” Bondra said. “She is constantly honing her craft and it shows. She holds program records for career doubles (15), strikeouts in a season (134), and strikeouts in a career (175). We always say this kid is willing to put the team on her back in crucial situations, whether that means getting a clutch hit, making a big play, or recording a strikeout, she’s ready.”

Peterson, a co-captain, will also play in the outfield and infield when needed. Last spring, she hit .432 with three doubles, three triples, one home run, 14 runs scored, and she knocked in 10 runs. In the circle, she was 3-1 with 13 strikeouts.

“(Peterson) is one of the most athletic players on our team with extreme versatility,” Bondra said. “She can literally play all nine positions and play them well. For her, it’s not a matter of whether or not she will earn a starting spot, but where exactly will that spot be? She is really coming into her own and we love the leader she is becoming.”

Prebul, a co-captain, will start behind the dish when she isn’t pitching. She was 2-0 with a 1.95 ERA last season and batted .381 with three doubles.

“She had never played the position of catcher before, but saw the need, adapted, and owned it,” Bondra said. “She has spent time in the offseason working to get even better, and her efforts in the weight room show. Her arm strength is tremendous. She is maturing quickly and becoming a leader from behind the plate. Her love for the game is very apparent and we love her desire to help make the team successful.”

Junior Laney Klika will start at second base and set the table for Gilmour’s offense as the team’s leadoff hitter. As a sophomore, she batted .452 with three doubles, 12 RBI, and 18 runs scored. She also led the team with 11 stolen bases and recorded 35 assists and 18 putouts on defense.

“She is our leadoff hitter and one of the best defensive second basemen in the area,” Bondra said. “She’s got such range and grace at the position. One of our favorite things about her though, beyond her talent, is her grit. She’s a hard-nosed competitor with a lot of fight. She also possesses great game knowledge and is aggressive on the bases.”

Juniors Allison Schuh and Emma Pickering round out Gilmour’s projected starting infield. Schuh will play shortstop while Pickering will lock down the hot corner.

Two seniors and a junior will patrol the Gilmour outfield.

Giampietro is an intriguing athlete. She already has signed a National Letter of Intent to play ice hockey at Ohio State but could just as easily have found a future on the softball field at the next level.

“She is probably the top female athlete in the school,” Bondra said. “Her grace on the ice as the Lancers’ leading scorer for the girls’ prep hockey team transfers over to the outfield. She is one of the smoothest fielding center fielders you will ever see and has such a competitive desire, whether that means not letting a ball drop in the outfield to doing whatever she can to create runs on the bases.”

Senior Sammi Fedeli will serve as the team’s designated player.

The Lancers have a host of others ready to step in and contribute when called upon.

“Our freshman class is strong with Molly McCrone and Mi-Na Diggs, who can both play the middle infield or outfield, along with Ella Jackson, who can play the corners and is a tremendous hitter, and Kieran Brown, who can play first base and outfield,” Bondra said. “We’ve also got returners Allison Schuh (a middle infielder), and Maddie Minotas, who can play a multitude of positions such as catcher, first base, shortstop, and outfield. Schuh is a little firecracker who can explode offensively at any moment, whereas Minotas remains cool, calm, and collected with the ability to hit the long ball. And let’s not leave out senior Sammi Fedeli, a two-year team captain. She’s got outstanding game knowledge and is a coach among players who brings great value to the program whether on the field or in the dugout.”

Gilmour’s talent, depth, and experience should help the Lancers to achieve their goals this spring, but the team relies on another attribute to measure its success.

“One of our biggest strengths is character,” Bondra said. “We have great kids, period. Our program philosophy is to be a great person first–great daughter, great sibling, great teammate–and then to be a great student, followed by a great softball player.”

That character allows the squad to overcome the challenges that are out of their control.

“As always, we have two major challenges each season, including not having a home field and not being able to get our entire team in the same place until the first week in April,” Bondra said. “Every game we play is on the road, so there is no home-field advantage. We deal with having to get off a bus, hustle to learn the lay of the land and get warmed up quickly. And, without our own field, we’re lucky if we can even get on one before the first game. The flip side of this challenge though is it prepares us for playoffs on the road. As to our other major challenge, we have 24 players in our program and all but one is a multi-sport athlete. When practice officially began in February, we were missing half the team because of winter sports–basketball, cheerleading, gymnastics, swimming, and hockey–not to mention, we have several missing on certain days because of JO volleyball. And to further complicate things, Gilmour has the only school-based female hockey program in the state of Ohio and six of our players compete for that program. The team is headed to the national tournament this year, which means if they win the national championship like we hope, we won’t see them until April 5. Four of those players started for us last season and have a great chance of earning starting roles again this season.”

On top of that, the Lancers carry a team GPA of around 3.9.

“I couldn’t be more proud to brag about that statistic,” Bondra said.