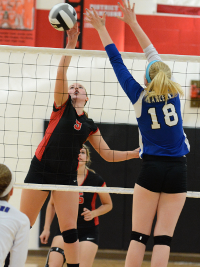 Cardinal’s volleyball team hoped to use Monday’s nonconference game against Gilmour Academy on Monday as a gauge to see how far the Huskies have come since the two teams met in the Division III district finals last fall.

One thing is clear following Gilmour’s 3-0 sweep. The Lancers are just as dominant as they were last season.

“We were not prepared mentally,” said Cardinal coach Lisa Shirkey. “We weren’t ready for that game. I just told the girls when you play a team of that caliber and you don’t come mentally prepared they’re going to pick you apart. They’re a good team and we needed to be ready.”

“Gilmour runs a really quick offense,” Shirkey said. “They ran their quick attacks early on and we lost a lot of points that way. I think that mentally hurt us.”

Cardinal struggled to set up its offense and several other unforced errors doomed the Huskies.

“Our passing struggled all night. We could never get an offense going tonight and we never seemed to be able to recover from it,” Shirkey said. “We made a lot of mistakes. We played it safe a lot of times and you can’t do that. We’ve got the players that can hit the ball. We just didn’t bring it tonight.”

The 2-2 Huskies don’t have any time to feel sorry for themselves. They have to regroup and pick themselves up off the court to play Chagrin Falls on Thursday.

“They’re going to have to,” Shirkey said.