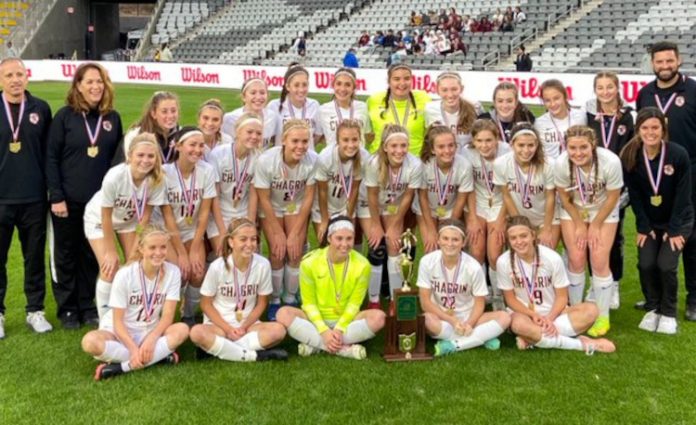 With nine returning starters from that squad, the Tigers are a heavy favorite to make another deep postseason run, but that’s never a given considering the number of talented squads within the Northeast District, let alone across the state of Ohio.

“We have a very experienced team with nine returning starters and a handful of others with varsity experience,” said head coach Joe Ciuni, who was a co-head coach with Pamela Malone last fall. “While it will be tough to replicate the success of the 2021 season, we have the potential to play even better soccer with most of our roster returning. The familiarity the players have with each other gives us the chance to continue to grow and develop our style of play.”

Among their graduation losses were standouts Peyton Gellin, who recorded 61 saves in goal, and Sarah Burgess, who finished second on the team with 48 points and led the Tigers with 26 assists.

“We lose two program legends in Peyton Gellin and Sarah Burgess,” Ciuni said. “While we have a lot of returning talent, replacing their leadership and ability to perform in the biggest moments will be something I hope multiple players grow into. We have some very good attacking options returning that have grown since last season. We will rely on them to up their playmaking and create multiple goal-scoring chances each game. Replacing Peyton in goal would be virtually impossible for any team. We will rely on string leadership and defensive play to help our young goalkeepers develop and grow in confidence.”

Sophomore Izzy Pribanic is projected to fill Gellin’s cleats in the net.

“Izzy is a young goalie with a lot of potential for the position,” Ciuni said. “As her confidence in her own game grows she will become a great shot stopper and last line of defense for us.”

The good news for Pribanic and the Tigers is she has a talented—and stingy—defensive line in front of her.

Junior Kate Bartlett, senior Oakleigh Niethammer, and junior Maggie Oliver each earned accolades for their individual performances during the 2021 season and sophomore Maggie Goss made an immediate impact as a freshman.

“Kate is a calming presence for everyone else on the field,” Ciuni said. “She makes everyone else feel more confident and she combines that presence with a great skill set and knowledge of the game. She is a huge presence for us on set pieces as our main free-kick taker.”

Niethammer, who transitioned from a forward to an outside back last season, was both honorable mention in the CVC and Greater Cleveland. She recorded two assists.

“Oakleigh converted from forward to outside back last year and saw her game really take off,” Ciuni said. “She is one of the toughest players on our team who has tremendous defensive instincts. Her courage and ability to lead on the field will be very important for us this season.”

“Maggie is one of the best all-around defenders in the area,” Ciuni said. “She combines great instincts, toughness in the tackle, and skill into a complete package. She has also become a great impact player on the offensive end with her skill and work rate allowing her to cover end line to end line.”

Goss finished the year with two assists and earned a reputation as a reliable stopper.

“Maggie became one of our more reliable defenders right away as a freshman,” Ciuni said. “She plays with great speed and toughness and rarely ever gets beaten 1v1. She will continue to grow into of the best defenders in the state as her career goes on.”

The Tigers allowed just one goal per game last season and again, opposing teams are going to find it difficult to find a crease in the Chagrin defense this season.

Adding to the challenge is the fact the Tigers have a multi-pronged offensive attack led by returning forward Elana McGinnis, who led the Tigers with 30 goals last season.

“Elana is one of the premier goal scorers in the area,” Ciuni said. “Her pace and skill combination makes her a difficult match for any defense.”

“Bella had an excellent freshman year that allowed her to really grow as a player. She seemed to perform best in big games and her work rate lets her have an impact on both sides of the ball,” Ciuni said. “Sophia really came on for us in the second half of the year. Her speed and desire paid off with some important goals at the end of the season and in the playoffs.”

In the midfield, the Tigers are both talented and experienced.

“Alex is one the best players on the ball in the area. Her ability to elude defenders and open up holes for teammates to attack is second to none,” Ciuni said. “Lindsay has some of the best vision on the team. Her ability to see a gap before it is actually there is something we will rely on to help us score.
Brix is our defensive midfielder and may be the best tackler I have ever seen at the high school level. Her ability to disrupt play is a game changer for us.”

While Ciuni is confident his team has the talent and experience to match its success from a year ago, he knows his players will be tested early and often with a grueling schedule and the program’s own expectations.

“Mental toughness will be vital for us this year,” he said. “We will have to properly handle high expectations for our team this year, and every opponent we face this year will be very motivated to play us. Taking this season one step at a time will be something we focus on, and we can’t be thinking about anything down the road.”

Ciuni and the Tigers will rely on their veterans to set the tone for the season, especially early on as this year’s squad establishes its own identity.

“We will rely on our experience and having so many returning players allows each player to really take a big step forward in their game as they will be surrounded by other veterans they have been playing with for a few years as well,” he said. “As a coach, I will be looking to put players in positions around the field that will maximize their skill set and impact. The leadership in the group has the potential to be great, which will allow a few of the younger players to feel confident and comfortable with their position and development.”