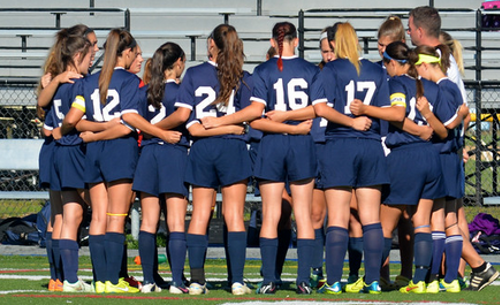 SOLON—Kirtland’s Katie Straus would have done anything to avoid a second straight shootout, but all she needed was her left foot and a tiny crack in the Warren Champion defense.

Straus ended Tuesday’s Division III regional semifinal game at Stewart Field with just over six minutes left in the second overtime when she found the right corner of the net to give the Hornets a 1-0 win.

“It felt so good,” Straus said. “I was getting really frustrated because we had a lot of shots but they just weren’t going in and I was just looking for anything, any opening, any shot. I was really motivated not to go back to PKs because that was awful. I don’t like the waiting. I don’t like having to just watch and wait and sit.”

Kirtland defeated Hawken in a penalty kick shootout on Thursday and the Hornets seemed destined for another penalty kick tiebreaker before Straus’ shining moment.

Straus and the Hornets weren’t going to let that happen.

“They were angry that we had gotten his far and they were mad at themselves,” said Kirtland coach Ed Bradac. “That was the change that I saw in them, where they said we do not want this to go to PKs at all.”

The Hornets, who improved to 16-2-2 overall and will play Creston Norwayne in Saturday’s regional championship game at Twinsburg, dominated possession and also had eight shots on target to just one for the Golden Flashes.

To the Hornets’ credit, they never let the near misses affect their focus.

“We tell the forwards, ‘You may be faced with five, six, seven shots, but you have to keep shooting,’” Bradac said. “That was the thing, keep shooting. Keep putting the ball on goal. Crash the goal. There were a couple times where we hit the crossbar, we pushed it wide. It was frustrating. What we kept telling them is it’s going to come. It’s going to come. You cannot defend for, what is that 80 minutes plus another 30, that’s (110) minutes of just constant defending. You can’t do it.”

The win extended Kirtland’s magical season. The Hornets previously had never won the University Heights District championship and now they are one win away from reaching the state final four.

“It doesn’t matter where the field is at, let’s just show up and play our game,” Straus said. “We have a lot of reasons to play for. We have a lot of seniors that don’t want to give up, me included.”

Kickoff on Saturday is scheduled for 3:00 p.m.