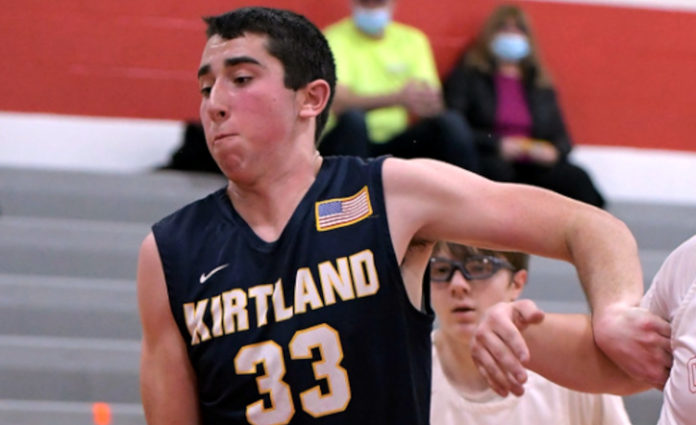 T.J. Green scored 12 of his game-high 21 points in the fourth quarter as Kirtland pulled away from visiting Wickliffe on Tuesday, 72-62.

The Hornets, who improved to 6-5 on the year, led by double-digits at one point in the second half but the Blue Devils rallied to make it interesting down the stretch.

“It was a typical Kirtland win,” said Kirtland coach Shawn McGregor. “We ground it out on the defensive end and forced a lot of turnovers. We missed a lot of shots but we made enough plays down the stretch to get the win.”

Anthony DeMarco led the way for the Hornets in the first half. He scored four in the first quarter and nine in the second on his way to an 18-point night.

Joey Grazia took the baton in the third quarter as he drained a pair of 3-pointers to finish with nine of his 16 in that frame.

“I feel great about it,” McGregor said. “The kids played hard and they came ready to do their thing. That’s the exciting part.”

Mason Bala, who finished with 15 points, and Danny Byrne, who scored 12, rallied Wickliffe in the second half.

That set up Green’s heroics in the fourth quarter.

“Wickliffe is a great team with a lot of great players,” Green said. “Our key to victory was breaking the press and scoring in transition. We had to be faster than them and Anthony Demarco did a great job of boosting us.”

With Wickliffe cranking up the intensity on the defensive end, Green worked his way to the hoop and recorded a double-double in the process.

“I missed a ton of layups in the first three quarters then took advantage in the fourth off of locating the ball for offensive rebounds and Joey and (DeMarco) gave me great looks tonight,” Green said. “I really appreciate the unselfishness on the team. My coach always helps with boosting everyone’s confidence and I realized that if we want to win, the seniors got to score a lot of points so most of us are taking advantage.”

Kirtland outscored Wickliffe in the fourth quarter, 18-17, to seal its win.

In addition to the three in double figures, six other Hornets scored in the game.

Wickliffe’s Shane Adamski also had a double-figure scoring night as he finished with 15 points.

Kirtland hosts Geneva on Friday and Riverside on Saturday.