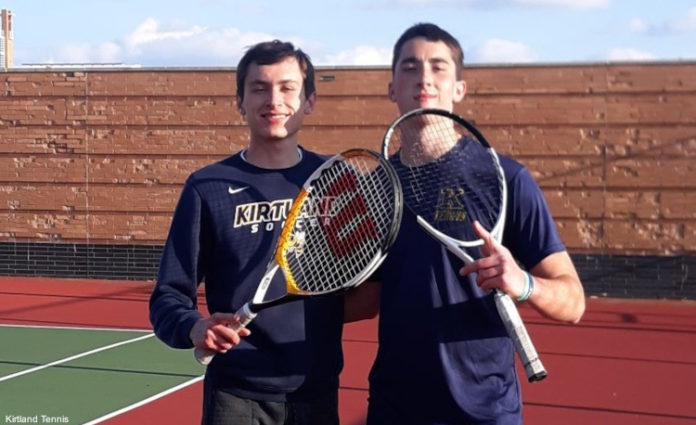 As a three-sport athlete at Kirtland, T.J. Green has experienced some of the most pressure-packed situations on the football field and on the basketball court. Likewise for Mario Rodin, who has played in a soccer state Final Four and was a key special teams player on Kirtland’s state championship football team.

Yet, neither was quite ready for the high-drama required to win the second doubles championship at the 2021 Chagrin Valley Conference Valley Division tennis championships on Saturday at Perry.

“It was probably the most adrenaline pumped I’ve been since kicking a field goal in the state championship game for football,” Rodin said. “It was funny because we had prom, and after prom, the previous night, slept three hours and then waited five hours at Perry for our first match to start.”

Green and Rodin are far from experienced tennis players, but their athleticism and success in other sports allowed them to quickly settle in on the court.

“To win the CVC title was awesome,” Green said. “Not many Kirtland teams have done it before and to be first-year tennis players and doing it was truly special. It was a really close game but an awesome end to a long tournament.”

The dynamic duo teamed up just a few weeks ago and has played five matches together.

They realized early on that they worked well together.

“We also have a similar playing style by always wanting to attack the net,” Green said.” Off the court, we’re really good friends, so that helps with communication and being able to have fun while playing. He’s a great player and I’m excited he was my partner.”

Green and Rodin cruised into the championship match and felt a bit of additional pressure to finish in two sets because Green had a date to attend the Perry prom later that night.

“We really didn’t want to go into a third set either because T.J. had to go to the Perry prom right after the match,” Rodin said. “To say it was exciting is an understatement.”

The Hornets didn’t sweep and instead found themselves in a difficult situation. They rallied back to win in a tie-breaker set.

“I think what helped was our attitude,” Rodin said. “We were down our first set, 0-5, and we told each other that we are not going to lose and that we have to just play one game at a time. Also, T.J. and I have been friends for a while and played football together, so that definitely helped with winning.”

Anthony Mancini and Alex Loncar teamed up to finish third at first doubles. The Hornets also placed in all three singles events.

Hornets shake off the rust at Kenston