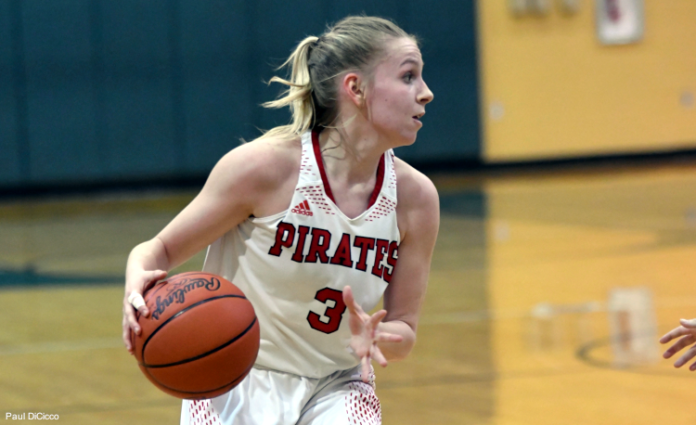 “It was amazing and a dream come true to be on that court with my teammates tonight,” Hacking said.

Perry had its hands full with a CVCA squad that returned nearly its entire roster from the team that played for a district title last season.

The Royals hit a pair of early 3-pointers to take a 6-2 lead but behind the hot shooting of Hacking and Infalvi and the defensive efforts of Jacy Anderson and Marcela Rodriguez the Pirates rallied for a 14-10 first-quarter lead.

The Pirates extended that lead to 29-21 at the break.

Infalvi dropped 13 points in the first half while Hacking finished with eight.

“Elle came out of the gates tonight and every three she made kept increasing my energy and every shot my teammates made increased not only mine but the whole team’s energy,” Hacking said. “Elle and I have always fed off each other and every shot we both make, we are there for each other.”

With Anderson controlling the boards, the Royals never threatened in the second half and Hacking made sure of that.

She scored 14 points in the third quarter as the Pirates pushed their lead to a 20-point margin and then emptied the bench in the fourth quarter.

Izzy McKoon contributed to the win with seven points and Anderson added six. Maddie Stevenson and Rodriguez both finished with two and Sophia Makad pitched in with a free throw.

“This win really helps set our tone for the season and shows that we are coming out to fight every game,” Hacking said. “It also shows what we need to improve and what we excel at. I am super excited we got this win tonight, especially with it being a team win. It’s a huge win to start the season.”

Perry finished 11-of-13 from the free throw line.