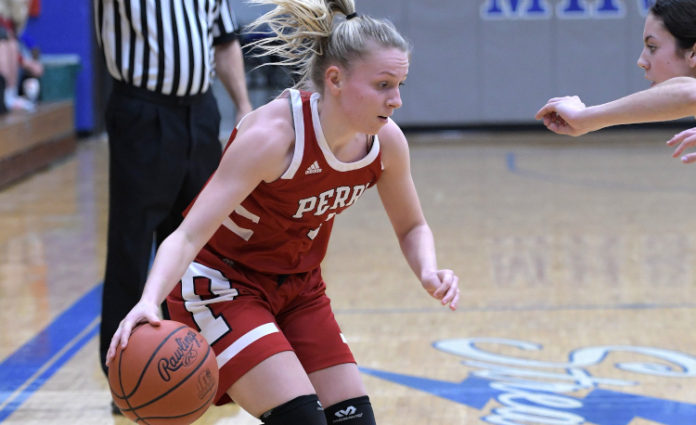 Hacking, who earlier this year scored the 1,000th point of her career, on Saturday pulled down her 500th career rebound.

“It’s really exciting to hit these two big milestones in my career, especially to be hitting them my senior year and making those memories,” Hacking said. “It’s exciting to see the reward of all the hard work that has gone into my game over the years.”

Hacking, a four-year starter, has been a key part of Perry’s run to back-to-back regional tournaments.

Her feat of 1,000 points and 500 rebounds is even more impressive considering she’s a 5-foot-8 guard.

“A big key in my success is always following my shot as well as others on the team,” she said. “As a guard, I’m crashing the boards from the outside which really allows me to get those long rebounds or push my way through the post to grab them.”

Perry has benefited from Hacking’s success as the Pirates are 73-17 during her four years on the roster.

But, the statistics only tell part of the story.

Hacking also possesses the intangibles that separate the good players from the great ones.

“I think this really shows that I have an overall game,” she said. “If my shots aren’t falling I’m still able to make a big impact on the game by getting either defensive or offensive rebounds, which can lead to some easy buckets down low or kick-outs to our shooters on the outside.”