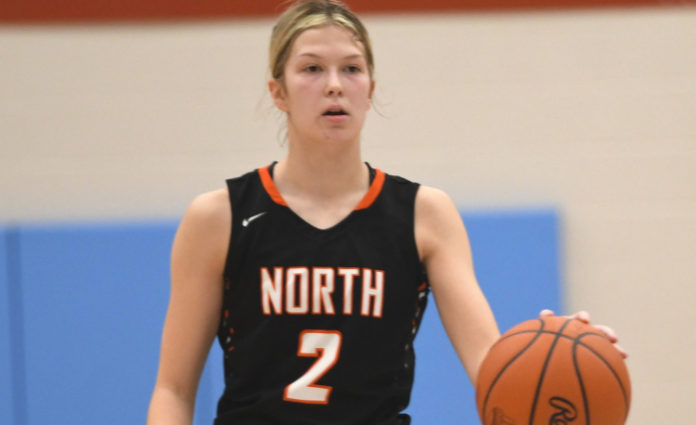 Cece Hamilton’s strengths center on her ability to distribute the basketball to North’s leading scorings.

In Saturday’s 44-30 win over visiting Riverside, Hamilton played a different role as she scored a career-high 11 points in the Senior Night victory.

“It felt really good to be able to step up and contribute to our win today,” Hamilton said. “It was also really cool that all of our seniors got to play a lot and make some great plays. Shout out to Kailynn (Kononow) for taking a charge.”

Neither team had much success dropping the ball in the hoop in the first half as North led just 15-10.

The Rangers outscored the Beavers in the third quarter, 16-10, to take control of the game. Riverside never recovered.

“We made a little run in third and got some separation and they never really got it back within eight points,” said North coach Paul Force. “It was an exceptional defensive performance from our kids today. We took away a lot of what they wanted to do.”

“I feel we really moved the ball well today and got a lot of people open shots,” Hamilton said. “We also had great spacing, which led to there being open seams for us to attack. Fourth-quarter free throws were huge today.

With the win, the Rangers improved to 7-4 overall and 4-3 in the Western Reserve Conference. The Rangers also won their second straight after an uncharacteristic two-game losing skid.

“My team and I are approaching every game like a Super Bowl,” Hamilton said. “We all know we haven’t played our best basketball yet and are always looking forward to getting on the court. I feel today was a great step in the right direction for our team and I’m excited for our next game on Monday.”

Riverside cruises to win over Mayfield

North rolls to win at South