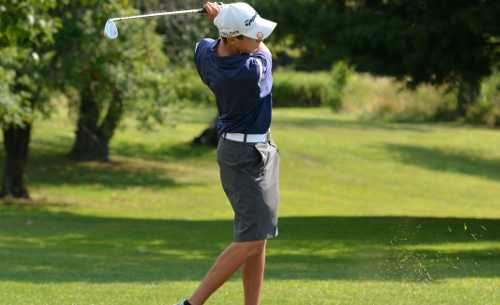 Depth was the difference in Hawken's 162-167 win over Kirtland in a Chagrin Valley Conference showdown at Fowler’s Mill on Wednesday.

The Hornets held a slight advantage over the Hawks until Hawken’s fifth man, Patrick Nestor, carded a 41 to pull off the win.

“We were very disappointed to lose this match,” said Kirtland coach Greg Cosimi. “Our kids gave it everything they had. Every one of them tried as hard as he could. I was very proud of our golfers today. They battled the newly-airified greens and a first-place Hawken team valiantly. We were actually leading after the fourth man, 168-169, but Nestor came in with a 41 from Hawken's fifth spot. It was closer than the numbers reflect.”

Kirtland scored the matches two lowest scores as Michael Schnur won medalist honors with a 37 and Brian Beres carded a 41. Adam Mueller was a stroke back at 42 and Daniel Heimsoth scored for the Hornets with a 47.

“Michael and Brian did an amazing job leading our team. Both of them struggled with their putting in the early going but found a way to get the job done,” Cosimi said. “Danny had a nice birdie on 5.”

“One of the great stories of the season has been the play of Adam Mueller,” Cosimi said. “He has come out and consistently scored in matches for us.”

In JV action, Kirtland defeated Hawken as Isabel Anness led the Hornets with a career-best 40 at Rolling Greens.

Kirtland will compete in the CVC post-season tournament on Monday at Windmill Lakes.