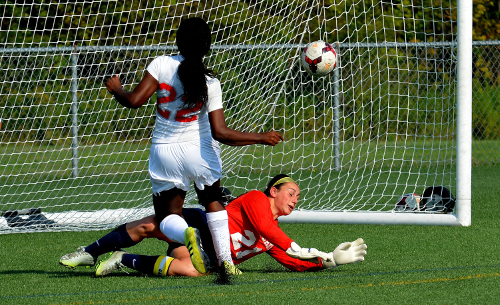 She didn’t but her teammate Daysha Randelson did.

Randelson scored two first half goals to lead the Hawks to a 2-0 win over the Hornets.

“I think our No. 1 priority was to make sure that Maggie Canitia wasn’t going to beat us,” Bradac said. “We went and watched Hawken play against Lake (Catholic). It was a 2-1 game. We knew who their strong players were. I would say that Randelson was the one that hurt us. Obviously she scored the two goals and one she just beat our keeper to the low post.”

The conference loss was the first for the Hornets since a 1-0 setback to Cuyahoga Heights on Sept. 13, 2012. The Hornets had won 15 straight Chagrin Valley Conference Valley Division games since then. This year, the Hornets bumped up to the Chagrin Division in the restructured CVC.

Kirtland, which dropped to 1-1 overall and 0-1 in league play, got off to a rough start.

The Hornets committed three handball violations and lost several balls in the backend that resulted in Hawken corner kicks.

Randelson, who scored 15 goals last year as a sophomore, scored her first goal with just over 29 minutes left to play in the first half. She made it 2-0 with 2:26 left before halftime.

“I was hoping to get out of the half down just 1-0,” Bradac said. “Getting that second goal scored on us was a little bit of an issue.”

Last season, Kirtland outscored its Valley Division opponents, 23-0. This year, the Hornets have their work cut out for them in the bigger division, but Bradac wouldn’t have it any other way.

Kirtland travels to Independence on Sept. 8.