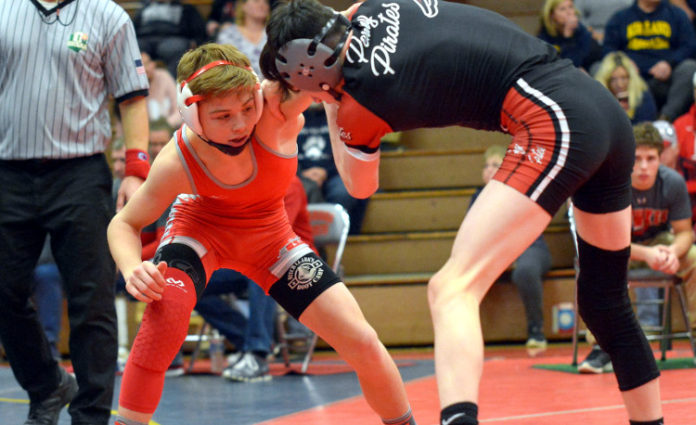 Hawken opens the 2020-21 season with just a handful of wrestlers but that group is talented and experienced.

Second-year head coach Mark Jayne believes his team is headed in the right direction and he has the Hawks focused on getting better each day.

“The coaching staff feels that we have a special opportunity to expand on our successes from last season,” Jayne said. “We are fortunate to be wrestling right now and we want to take every opportunity afforded to us. Hawken and our athletic director, Jim Doyle, came through big by putting in protocols and equipment to make everyone safer to practice and compete. Our team motto this year is ‘Kaizen,’ a (Japanese) term meaning continual improvement. The focus is on improvement every day and week and we want to see our team compete hard.”

While the Hawken lineup has several holes, Jayne is focused on the wrestlers who will step onto the mat this season.

Among the five wrestlers are four district qualifiers, one state place-winner, and a talented freshman.

“The Hawken wrestling team is experienced and we are looking on improving from where we left off last year,” Jayne said. “All of our returning wrestlers are either state or district qualifiers. We also have a freshman who pushes everyone in the room. The wrestlers are able to get extra individual instruction to make improvements based on their individual needs. We have a strong coaching staff that can do that, and with our technology, we can Zoom in to practice every day on the big screen coach Frank Jayne, one of the most experienced coaches in the state. He has been a part of 77 individual state championships in his tenure that includes Elyria and St Edward.”

The most decorated Hawk in the wrestling room is junior Patrick Reineke, who placed eighth in the state as a freshman and won sectional and district titles last season before the state tournament was canceled.

“Patrick Reineke one of the quickest and best athletes in the state,” Jayne said. “He has elite kinesthetic and proprioceptive awareness. Reineke returns as a two-time state qualifier and placed as a freshman. We were all disappointed for this lost opportunity last year when state was canceled but excited for what the future brings. Reineke will be moving up from the 106-pound weight class and will adjust well to his new weight. He brings a wealth of knowledge of the sport to the team and we look forward to watching him compete and evolve this season.”

Reineke could hit the 100-win milestone this season.

Freshman Lucas Brandt will wrestle at 120.

“Lucas Brandt came in as a freshman ready to go and immediately set the pace in the room,” Jayne said. “He comes in as a two-time (middle school) state qualifier and looking to add that to his high school resume. Brandt is a three-sport athlete and is always looking to get the edge by working extra before or after practice. He is a goer in the room and in matches. His attitude will get him improving every week and will be fun to watch his progression”

Hlifka, who will wrestle 145, finished 31-13 with 17 pins last season. He placed third at the sectional tournament.

“Jacob Hlifka is coming off a great year in winning 31 matches with 17 pins,” Jayne said. “Hlifka won the Hawken Invite, placed third at sectionals, and won a pair of matches at the district tournament this past season. This year we look for him to take the next step on the mats and as a leader on the team.”

Senior Jeremy Leizman returns after finishing last season with an 11-10 record with six pins. He sat out the second half of the season after transferring to Hawken but was a 2019 district qualifier.

“Jeremy Leizman is a senior returning district qualifier looking to make his mark at Hawken,” Jayne said. “Leizman is hungry to get back on the mats after sitting out the second half of the season last year. He has a prowess on the mat we like to see and is a good member of the team.”

Senior Jay Doyle also returns to the lineup after punching his ticket to the district tournament last season.

“Jay Doyle was a good example of someone continuing to improve throughout the season,” Jayne said. “He saved his best wrestling for the end of the season and earned a qualification to the district tournament. In Doyle’s senior season, we look for him to cook up some wins and be a good senior captain. We want him to push himself as much as possible and accomplish his goals. Doyle is also a phenomenal cook, with a specialty in cranberry sauce.”

Hawken enters the winter season with many challenges, including finding opportunities to wrestle, but Jayne is confident his wrestlers will meet those challenges head-on.

“The season has had its challenges with making a schedule for our needs,” he said. “Many tournaments have been canceled, so we have to be creative in our scheduling and practices. Focusing on our individual achievement and process goals is important to keep improving and the wrestlers motivated throughout the season. We are wrestlers so we will deal with whatever comes our way with perseverance and humbleness.”