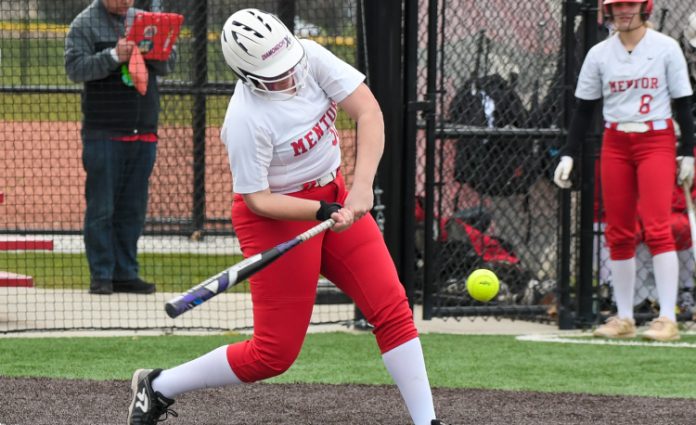 Abby Haydu’s first-inning home run sparked the Mentor offense in a 16-7 win at Strongsville on Wednesday.

Izzy Coode hit a leadoff single and Bella Carcioppolo drew a walk to lead off the inning. Leah Temple then hit an RBI single and Haydu cleared the bases with her three-run shot.

“It was extremely exciting for me knowing I could put my team in the position to get the lead early,” Haydu said. “(That) set my mentality for the rest of the game.”

Haydu faced a 1-2 count when she saw an outside pitch she liked.

“It was my money pitch so I knew I had to take advantage of it,” she said. “I was just thinking contact repeatedly in my head; contact is all I needed to help us. It felt easy off the bat. My contact felt strong while my swing felt effortless.”

Mentor’s lead was short-lived as the Mustangs tied the game with four runs on two hits, three walks, and an error in the bottom half of the inning.

Addison Siedler relieved Maggie Haydu with one out in the first. She struck out the next two hitters to end Strongsville’s big inning.

“We kind of counted on Addison to come in and shut them down and she did,” said Mentor coach Jo Bondra. “Our offense got hot too, so that was nice to see today.”

Both teams scored a run in the third and Mentor added four in the fourth to take a 9-5 lead. Strongsville scored two in the bottom of the inning but the Cardinals erupted for six runs in the fifth and added another in the sixth to pull away from their hosts.

Bella Carcioppolo was 4-for-4 with a triple, two runs scored, and an RBI. Temple finished the game 3-for-3 with a double, three runs scored, and three RBI. Coode and Jordan Alesci each added two hits, and Sofia Kraska hit an inside-the-park home run in the sixth inning.

“We moved Izzy up to the top of the lineup because she’s been getting on base and that’s what you’re looking for from a leadoff hitter,” Bondra said. “We were able to rally behind that. Leah has been tweaking her swing and she’s definitely back to hitting the crap out of the ball. Abby got her first home run and we used our entire bench and everyone that came off the bench produced in some kind of way for us.”

Siedler earned the pitching victory in relief. She allowed one earned run on six hits in 5 1/3 innings and struck out eight. Kristin Dems allowed one hit in one scoreless inning of work.

With the win, Mentor improved to 9-5 overall and 5-1 in the Greater Cleveland Conference. An early loss to Brunswick left the Cardinals in a must-win situation in conference play.

Haydu is confident the Cardinals are up to the challenge.

“As a team, we know we have to fight to the end to win the conference,” she said. “We have to be locked in from the first pitch and even before the game starts. My teammates and I can handle the pressure. We put all of our effort and hard work into these games.”

Cardinals get defensive in win over Brunswick