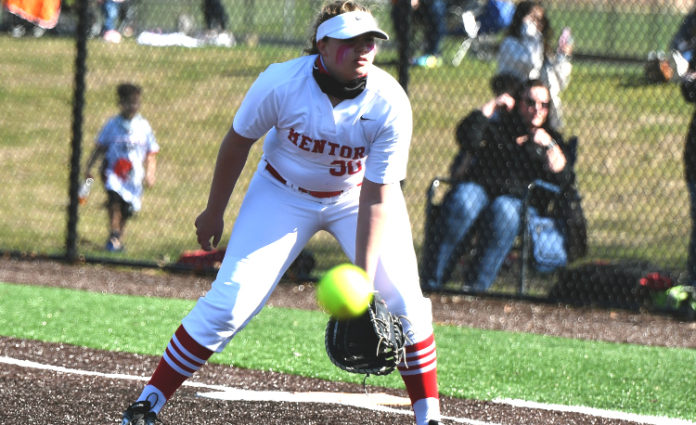 With the win, Mentor improved to 4-0 overall and 2-0 in the Greater Cleveland Conference.

“It’s exciting to open the week with a conference win,” said Mentor coach Jo Bondra. “We started a little bit slow today but we were able to string some hits together after the first couple innings. We have two tough opponents coming up. These next two games should tell us a lot about ourselves.”

Adrianna Sluga helped the Cardinals build a 1-0 lead in the bottom of the first when she drew a one-out walk and stole second.

Haydu then hit a two-out single to give Mentor the early advantage.

After a scoreless second, Mentor manufactured a three-run third inning.

Bella Carcioppolo bunted her way to first base and she moved to third on Sluga’s sacrifice. Leah Temple then singled to make it 2-0 and Haydu hit the first pitch she saw over the fence in center field to push the lead to 4-0.

A hit batsman and a home run pulled Solon to within 4-2 but the Cardinals responded with another scoring spree in the bottom half of the inning.

Carcioppolo finished the game 3-for-4 as Mentor’s leadoff hitter.

“Bella is very important to our offense,” Bondra said. “Not even just at the plate, once she gets on she’s reading pitches to take extra bases and making catchers throw to try to force a mistake.”

Sluga followed up the Carcioppolo hit with an RBI double that increased Mentor’s lead to 7-2.

Solon pushed across an unearned run in the top of the fifth but Mentor countered that run with one of its own in the bottom half of the inning when Allie Loparo singled and Bush followed up with an RBI single.

Carcioppolo led off the Mentor sixth with a single and Sluga drew a walk. Temple singled to score both runners and Haydu cleared the bases with her second home run of the game.

“When I am batting I don’t worry about the pitch I see. I see it, then I react,” Haydu said. “I just know that I have to hit the ball no matter where it is on the plate. My first hit of the game was a single, which broke my bat. Coming up to my second at bat, I felt confident that I could hit the ball, but I had no idea it was going over the fence. The best part of a home run is not knowing when they are going to happen and it feels awesome when you get two.”

Through four games, Haydu is batting .692 (9-for-13) with two doubles, two home runs, six runs scored, and she has knocked in eight runs.

“The key to my success is never giving up and never to stop working,” Haydu said. “I work at practice and at home going through my hitting routines. No matter how difficult the opponent is you can’t give up. I use every pitch and opportunity the pitchers give me at the plate to get on base.”

Haydu, a sophomore, didn’t have the opportunity to play as a freshman so she’s taking advantage of every at bat.

“My feeling of success this early in the season has boosted my confidence greatly,” she said. “I felt a little at a disadvantage missing my freshmen season due to COVID and I am making up for lost time. It’s very exciting knowing that you just got your team closer to another win and drives me to keep getting better.”

Temple and Bush both finished the game with two hits. Temple also knocked in three runs and nabbed the pitching victory. She allowed two earned runs on three hits and struck out nine in six innings. Kristin Dems pitched a scoreless seventh inning. She struck out one.

“They had a plan and were patient at the plate. We knew she would go inside and outside so they just waited for the pitch they wanted to hit,” Bondra said of her hitters. “Our pitchers came out with another strong performance today. Temple had nine strikeouts and Dems finished the game strong for us.”