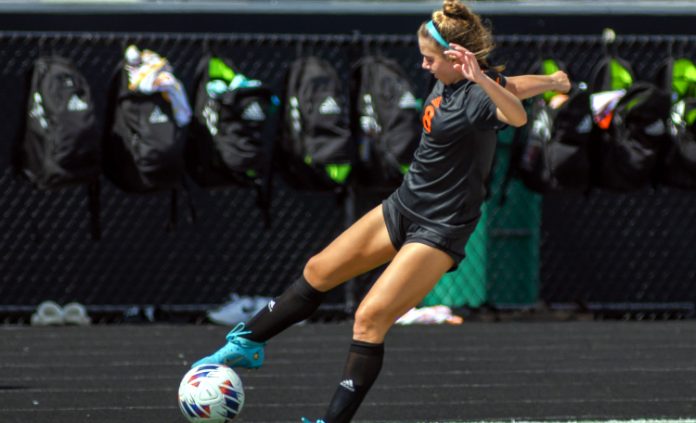 Brennen Herbert’s first goal of the season was a big one as she led North to a 1-0 non-conference victory over visiting Perry on Saturday.

With the clock winding down, Herbert found the back of the net unassisted with 2 minutes, 14 seconds remaining in the game.

“It was very exciting to score the one and only goal of the game,” Herbert said. “We, as a team, were shooting over and over again and nothing was hitting the back of the net. (I’m) over the moon to have been able to do it for the team.”

The win snapped a six-game winless streak for the Rangers, who improved to 4-4-2 on the year.

North opened the season with three straight wins before a stretch that saw the Rangers tie two games and lose four others.

Herbert righted the ship with her final opportunity of the game.

“I’m not sure how it happened, I just remember getting the ball to my foot taking a few touches, and shooting it,” she said. “Luckily for me, it hit the bottom right corner of the net.”

The Rangers now head into Tuesday’s showdown with rival South riding a one-game winning streak and with even more confidence.

“After a hard five games of not winning it is huge for us to win this game against Perry, as we go into the second half of our season with a lot a of conference games coming up,” Herbert said. “It is important for us to have this confidence back so we can move forward together as a team. Now that we have this win, it should give us the confidence we need going into the South game on Tuesday.”