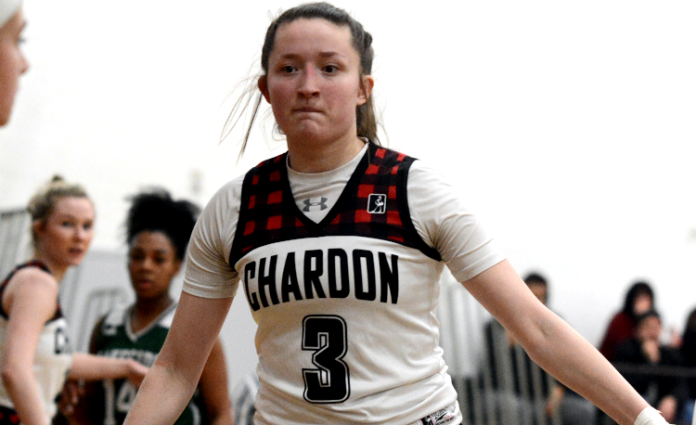 With five returning starters coupled with size and athleticism, Chardon will present a challenge for all opponents this season.

“I think our potential is as high as it’s ever been in my time at Chardon,” seventh-year head coach Cullen Harris said. “We have size, athleticism, length, and depth to be able to be a difficult matchup for a lot of teams.”

The Hilltoppers, who finished 13-11 overall and 7-7 in the Western Reserve Conference last winter, return seven players with varsity experience.

If those returning players can raise their level of play and the team’s newcomers can step in and provide quality minutes, the Hilltoppers should be competitive throughout the season.

“We will need to finish possessions on both ends of the floor,” Harris said. “We will also need to be able to put team achievements ahead of individual achievements.”

“Sammy is a matchup issue,” Harris said. “She can bully smaller guards and blow past bigger posts. She is athletic and finishes in the lane really well. Sammy is our do-it-all player who can single-handedly impact the game in a wide variety of ways.”

“Kayla has length and athleticism that is second-to-none in our area,” Harris said. “She is able to guard a variety of positions, at times being asked to guard the other team’s leading scorer regardless of their position. Kayla alters a lot of shots in the paint as well.”

“Jo’s length and athleticism on the defensive end help force turnovers and gets disruptions,” Harris said. “She can score at all three levels.”

“Ashley handles the ball well and helps facilitate an offense. She is scrappy on defense and helps dictate the tempo for our team,” Harris said. “Emily is a dynamic ball handler and a good defender. She is growing every day and has unlimited potential.”

Seniors Lexi Paros-Gaser and Fiona Slaymaker return with plenty of experience under their belts.

Juniors Julia Gray and Riley Zimmerer will play key roles off the bench. Gray is a 5-foot-6 guard and Zimmerer is a 5-foot-8 guard.

“Julia is a great defender and can knock down outside shots,” Harris said. “Riley might be our best shooter in the program. She has a quick release and shoots it effectively.”

Meanwhile, Harris is excited for the potential freshmen Emma McCartney and Nicole Krakora will bring to the floor this season.

McCartney is an athletic 5-foot-10 guard/forward and Krakora is a 5-foot-5 guard with a great shot.

“Emma’s athleticism is off the charts. She can score at the rim and from the perimeter. She is disruptive defensively and anticipates things very well. Thus far in our scrimmages, she doesn’t look like a freshman,” Harris said. “Nicole challenges Riley for best shooter in the program. She has an extremely quick release and she is aggressive on the defensive end of the floor.”

Chardon’s Kayla Noerr excited to be a Butler Bulldog