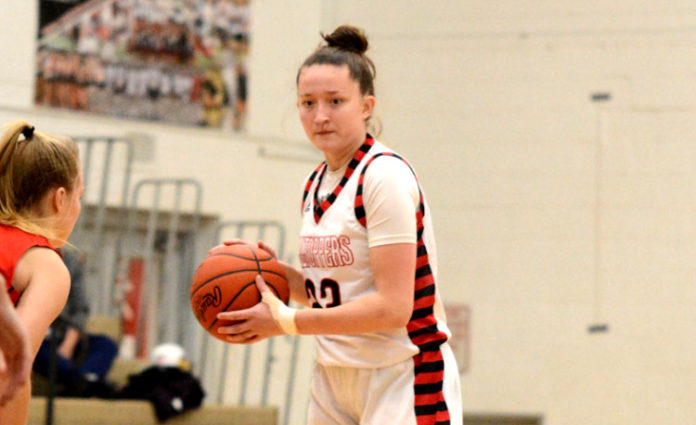 With two players in early foul trouble, Chardon turned to its depth to gut out a 62-55 non-conference win over visiting Louisville on Saturday.

Both Sam Liechty and Kayla Noerr were sidelined due to early foul trouble, which allowed several other Hilltoppers to rise to the challenge.

“We were able to step up and that’s what’s going to help make us successful down the road is the ability to have some depth and be able to move some kids and everybody is ready to step up when they have their opportunity,” said Chardon coach Cullen Harris. “It was a collective effort. We’re as good as our weakest link and I think our weakest link is pretty strong. I’m happy with where we’re progressing and excited to get back at it on Monday.”

Chardon, who won its third straight game to improve to 4-2 on the year, led 27-17 at halftime.

The Leopards made several runs in the second half, especially when they had a size advantage with Liechty and Noerr on the bench.

“They kept making little runs and we couldn’t rebound the ball,” Harris said. “Without Kayla and Sammy out there, and they had some nice sized athletes, they’d throw up a shot and just go get the rebound and I’ve got Ashley Hoenigman trying to rebound it at 5-foot-3. We were able to secure enough of them and make our free throws down the stretch. That’s what I’m talking about with our weakest link, our kids are stepping up and they’re always ready to play.”

Jo Janda tied for the game-high in scoring with 21 points to lead Chardon’s offense.

She was especially clutch at the free throw line down the stretch.

“We knew they were going to be a tough team so we all knew we had to be on our best games and I knew it was going to be a close game so free throws would be the deciding factor,” Janda said. “We were all anxious to get back in the gym and we wanted to play and compete and I think that’s what we did today.”

Janda is the fifth different Hilltopper to lead the team in scoring in Chardon’s first seven games.

“We had Jo lead us in scoring today,” Harris said. “Against Cleveland Heights it was Emily (Noerr), against Hathaway Brown it was Ashley and against Jefferson it was Sammy. We’ve had five different kids lead us in scoring in seven games and that’s what’s going to make us a tough matchup down the road. If you want to key in on one kid, the other four kids are going to be able to score and beat you.”

It was that team approach that helped Chardon hold off the Leopards.

Emily Noerr added 14 points in the win and Liechty also finished in double figures with 13 points. Hoenigman and Kayla Noerr both finished with four points and Julia Gray drained a key 3-pointer to stop a Louisville run late in the game.

“In the fourth quarter after they made a little bit of a run, Julia Gray, she’s a junior and our first guard off the bench, she missed her first three or four shots but she got a reversal wide open and stepped in and shot it with confidence and it went in,” Harris said. “The lead went from five to eight and that’s a big difference. I give her credit for having the belief and stepping up and believing the next one going in. Her teammates believed in her and made the extra pass.”