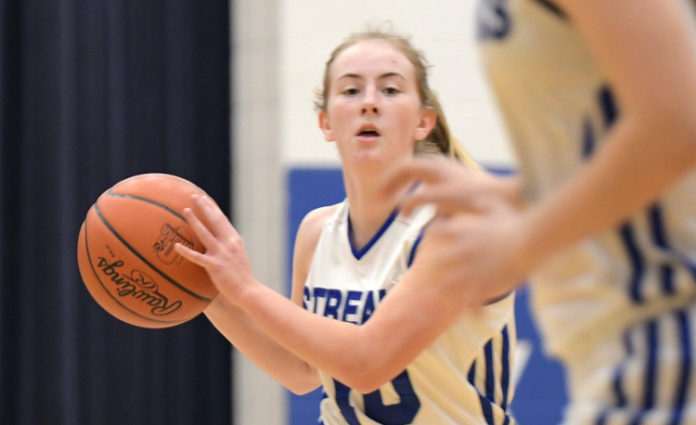 A late start and mid-season pause have plagued Madison throughout the season and it was evident in a 69-37 loss at Archbishop Hoban in a Division I sectional final on Thursday.

The Blue Streaks struggled to find their offensive rhythm and by the time they did, the Knights had taken control of the game.

“I felt like every time we got momentum we got shut down,” said Madison coach Tedd Wagner of the challenging season. “I was talking to Coach (Heather) Reho about how we couldn’t maintain our strength and conditioning with all the layoffs. With that said, the girls battled and fought and never made excuses. Shooting is a skill and we never could maintain consistency and thus we struggled. I’m very proud of our effort and we can build on that next year.”

Hoban’s Lanae Riley found her stroke early as she scored 20 of her game-high 22 in the first half as the Knights built a 46-21 halftime lead.

Madison’s Riley Montagner kept the Blue Streaks in the game early with 13 first-half points but Hoban continued to put together runs that helped the Knights extend their lead.

“We both got off to a slow start so it kept it close,” Montagner said. “They started hitting their shots and we didn’t. We were unable to keep up.”

Madison’s postseason run is over but the Blue Streaks have one last chance to close the season on a positive note as they travel to Hudson on Tuesday.

“It would be great to get a win for the last game of the season,” Montagner said. “Being a shortened season, we lost a lot of court and playing time, so a win would be a great way to finish off this crazy season and give us some motivation going into the offseason.”

Madison rallies for win over Geneva

Rangers bounce back with win over Madison