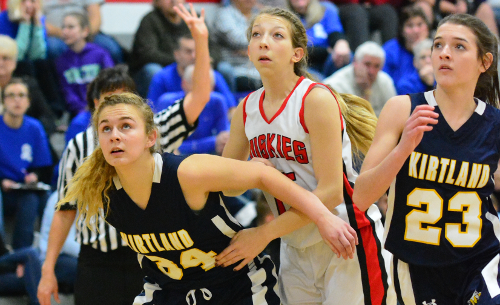 MIDDLEFIELD—After a long week of midterm exams, Kirtland head coach Bob Bell wasn’t sure what to expect out of his players in Friday night’s Chagrin Valley Conference Valley Division showdown at Cardinal.

Jess Koches hit the first basket of the game to give Cardinal a 2-0 lead with 5:07 left in the first quarter.

The Hornets amped up their press and distributed the basketball to find open shots. That led to 16 straight points and a 14-point lead with 7:08 to play in the first half.

“It was the press and we were mixing defenses a little bit between man and zone,” Bell said. “It had an effect.”

It had an effect on both teams.

The Huskies, who dropped to 1-5 overall and 0-3 in the CVC, never recovered from Kirtland’s big run or from their own first quarter shooting woes.

“It got us down for sure,” said Cardinal coach Luke Kruse. “We had some really great looks and opportunities in the first quarter. If we convert on those maybe we’re up 8-2 or 8-0 or something like that but once we started to miss those shots I could see our confidence and our composure start to take a hit.”

Kirtland’s press kept the Huskies from finding their groove on the offensive end of the floor.

“Once they went into our press we made some really poor decisions bringing the ball up the court and then we found ourselves in a hole,” Kruse said. “I don’t think we gave up; I think we kept fighting, but against a good team like Kirtland you’ve got to make a few shots early and get that momentum going and we never got it going.”

Sam Achauer scored a game-high 15 points to lead Kirtland. Claire Neibecker and Taylor Somodji both scored nine for the Hornets and Deanna Ponzani and Kerri Zalba contributed with seven and six, respectively.

“I think when you’re playing against a 3-2 zone defense it’s important to do that, that way they can’t key on one person,” Bell said. “It’s very important.”

The Hornets improved to 4-3 overall and 2-1 in league play.

After winning back-to-back CVC titles, Kirtland opened league play with a loss to Harvey and now the Hornets are in the unfamiliar position of chasing down the league-leading Red Raiders and undefeated Fairport Skippers.

“We’re having fun chasing some of the other teams in there,” Bell said. “We’ll see how things work out as we move into the New Year. The girls are responding very well. They accept the challenge. They know that we dropped one against Harvey and Harvey probably deserved to win it. Now we’re ready to get to work and see if we can’t win as many of them as we can.”

For Cardinal, the Huskies are focused on snapping a five-game skid. That starts with regaining their confidence and playing at a higher level.

“I think if we play our best we can give them a game and that’s what was disappointing,” Kruse said. “I think we just didn’t give them our best shot tonight and it definitely takes your best shot to beat a team like Kirtland. Hopefully next time we play them we’ll rebound a little bit, we’ll watch the tape and make some adjustments and changes against that pressure and hopefully we’ll make a few more shots the next time around. I think we can compete with them but as I said, we didn’t give them our best shot tonight and that’s what it’s going to take.”