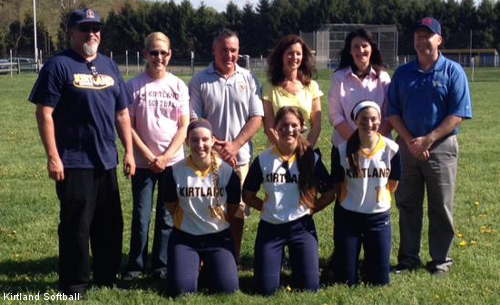 The 2015 season was supposed to be a rebuilding year for the Kirtland softball team and it sure looked that way after the Hornets lost their first two games of the year.

Since then, the Hornets have won 13 of their last 14 games to win their third straight Chagrin Valley Conference Valley Division championship. The Hornets had been in a tie with Berkshire until Wednesday when the Badgers lost to Fairport Harding and the Hornets closed out league play with a 16-1 Senior Night win over Harvey on Thursday.

“It was really great to send the seniors off with a victory in their last regular season game at Kirtland,” said Kirtland coach Tony Scibelli. “We did it the way we’ve done it the last three years, by really just putting the pressure on Harvey’s defense by putting the ball in play and racking up runs early.”

The Hornets, who improved to 13-3 overall and 7-1 in league play, jumped out to a 4-0 lead in the first inning and added six more in the second to seal their fate.

Hallie Ward started the rally with a double and Samantha Achauer and Olivia Mancisio hit back-to-back singles. Sarah Steigerwald then walked and Cameron Garcia reached on a fielder’s choice . Rebecca Kissinger later singled and Danielle Meyer reached on an error to close out the first inning scoring.

Ward again started the second inning with a single and Achauer, Mancisio, Steigerwald, Garcia, Kissinger and Danielle Davis all had base hits in the inning. Ward also doubled in her second at bat of the frame.

Ward finished the game 4-for-4 with two doubles and two runs scored. Achauer was 3-for-4 and Mancisio went 3-for-3. Steigerwald 1-for-3 but scored two runs.

“Our first four did a great job of doing what they do best, which is put the ball in play and advance runners,” Scibelli said. “They do their job very well.”

“Morgan pitched a great game,” Scibelli said. “She looked great. Yesterday, (in an 8-7 win at Streetsboro) Colleen (Baldrey) did a really great job as well. That’s a key for us if we want to go far. We need those pitchers to step up and they have been the last couple of weeks.”

Faber and Baldrey both are freshman that now have a lot of varsity experience under their belts. That has translated into a more dangerous Kirtland team.

“Both our pitchers initially were struggling with their confidence a little bit,” Scibelli said. “We had a very tough scrimmage schedule and that’s going to be rough on a freshman pitcher. Both these kids are confident and they’re doing their job very well and allowing us to stay in games.”

Kirtland, the No. 2 seed in the Division III Jefferson District, opens the post-season on Wednesday against the winner of No. 3 Berkshire and No. 5 Garrettsville Garfield.

The Hornets are 1-1 against the Badgers but are a much different team than the one that dropped a 9-1 decision to Berkshire in the second game of the season.

“This is the best version of our team is happening right now,” Scibelli said. “It seems that every day we’re getting better and that’s what you want at this point in the season. It’s really hard to peak at this time because it’s such a long year and you have all the rain outs and that really hasn’t affected our team. We’re really happy about that.”