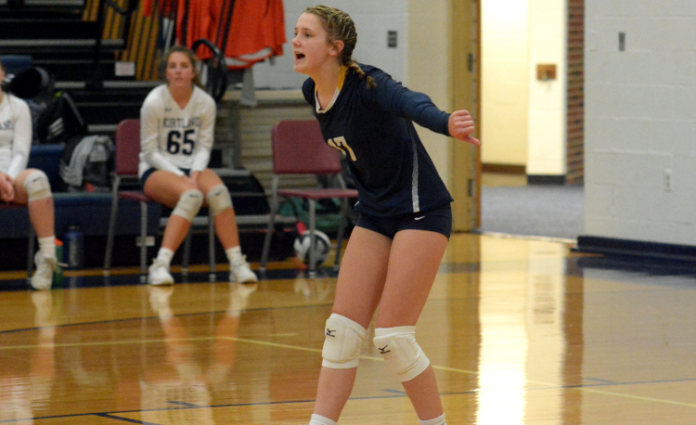 After all, the Hornets entered the match as the third seed in the Division III district while the Rovers came in at No. 8.

On top of that, Kirtland was riding a four-match winning streak and has been playing at a high level all season.

“I was really impressed with how we played,” said Kirtland coach Arlayna Newcomer. “We have been spending a lot of time in the gym, especially in the postseason, and trying to focus on what we need to get better at. We’re doing a little bit of scouting too but we’re really just focusing on us and how we can get better every day and we’re doing a really good job of that.”

It doesn’t hurt to open the match with 15 straight service points.

“We had an amazing serving run,” Newcomer said. “Ava Golen scored 15 straight points so we started off 15-0. We had a game plan going into it and one of the things was being aggressive serving to win the serve-receive game and I’d say we definitely did that.”

Golem understood what was at stake in this district semifinal and she wanted to help the Hornets get off to a strong start.

She accomplished that goal and more.

“It is extremely exciting to pick up this win and advance to the district finals, especially with how young our team is,” Golem said. “I knew we had to start off the game strong. After the first few serves, I started to get excited but I knew I had to stay focused and keep serving aggressive because that is a big part in winning games.”

Rootstown was more competitive in the final two sets but Kirtland swept the match with 25-16 and 25-19 wins.

Natalie Glowe had a big night at the net as she recorded another double-digit kill match.

“Natalie had a really great night,” Newcomer said. “She was on fire. They couldn’t stop her. They were trying to throw up a block and doing everything they could but she was just unstoppable.”

With the win, Kirtland improved to 16-6 overall and will play in its first district championship match since 2011.

The Hornets last won a district title in 2010 but that was in Division IV.

To win their first Division III district championship, the Hornets will have to beat a familiar foe on its home court.

Kirtland will play at Cardinal on Saturday at 1:00 p.m.

“We’re really looking forward to this,” Newcomer said. “We haven’t made it to (the district final) with me coaching and all the girls we have on the team right now. Last year, we fell short at the district semis so we’ve got a few big things for us trying to get that district title and then getting to play that third game against Cardinal and see who is going to get the best two out of three. I’m really excited for it and to see how the girls step up on Saturday.”

Carinal won 3-1 at Kirtland on Sept. 9 and the Hornets avenged that loss with a 3-1 win over the Huskies on their home court on Oct. 12.

“This game against Cardinal will act as a tie-breaker since we are 1-1 with them,” Golem said. “We are a team that plays with a lot of emotion, especially with a rival team. I am confident that everyone will go out on Saturday and play hard because we all really want to beat Cardinal, our ‘rivals.’”